Follow Opscode’s Guide to installing Chef and its dependencies. In a nutshell, you’ll want:

Read through the first and second pages to help you install the dependencies and the actual Chef gems. Skip over “You should set up your User and Organization” until after you’ve installed all the bits.

Once you’ve gone through the install process, check that the Chef gem is actually installed:

Now you need to set up your organisation’s account with Hosted Chef. Hosted Chef stores your configuration data which your machines “pull” to configure themselves with.

Follow the “You should set up your User and Organization” section of Opscode’s guide and keep the files you download in a safe place.

Pick the free plan for now; you can upgrade later or run your own Chef Server.

If you haven’t done so already, follow the guide to install Xcode, Rubygems, Chef and Git.

Your Chef Repository is where all your server configuration is stored. You should treat this as source code and check it in to your favourite SCM software. I use Git. As this walkthrough is just kicking the tyres of Chef, don’t worry about SCM for now.

Change to your favourite directory – we’ll use our user directory here – and do the following:

This clones an empty Chef Repository to your workstation and contains the basic folder structure necessary for Chef. If you’re familiar with Rails, its much like rails new.

Chef’s command line tool, Knife, reads its configuration from .chef directories. I don’t know why, but you have to create this yourself:

Copy the keys and knife configuration you downloaded earlier into this directory:

Replace USERNAME above with your Hosted Chef Username, and ORGANIZATION with the short-name you provided when you signed up.

From now on, whenever you are in the chef-repo directory, Knife will connect to Hosted Chef.

To check all this works so far, run knife client list in your chef-repo directory and you should see your ORGANISATION-validator in the results.

So this is where my tutorial differs from the others I’ve found. Instead of trying to run before we can walk, we’re just going to get apache running so that we can hit our server from a web browser.

This command uses knife to “install” the apache2 cookbook from the chef community cookbook website. Although we’ve downloaded the cookbook locally, we need to upload it to our Chef Server (Opscode Hosted Chef in this case).

Roles allow you to group a set of cookbooks to create a template for a particular purpose. For example, you might want a LAMP role that configures a server as a LAMP stack. For this you’d make a role consisting of the apache, mysql and php cookbooks. You could then apply the LAMP role to any machines you want to run as a webserver, instead of including the individual cookbooks every time.

Roles are plain Ruby files, so

Its likely that we want more than just apache when we’re setting up our webservers, so you can add more cookbooks in to the run_list section. For now though, just apache will do.

As the chef-client program on the node (in this case, your EC2 instance) “pulls” from the Chef Server you need to upload the new roles to Hosted Chef.

As we’re starting with a blank EC2 instance I also used the “base” role from the rails-getting-started tutorial.

and Ubuntu/Debian users will have to install some extra stuff apparently:

Also gem install net-ssh-multi as you need it for knife to ssh to your instance.

You also need to add your Amazon Access Key ID and Secret Access Key to the knife configuration file located at chef-repo/.chef/knife.rb

Add the following to the end:

Add the HTTP and SSH rules to your default security group. If you’re not familiar with EC2, click the “default” security group and change to the inbound tab. Select “HTTP” from the dropdown and click add rule. Do the same for SSH and then click “Apply Rule Changes”. You should see the new options in the table on the right.

Create a new Key Pair and save it in ~/.ssh. 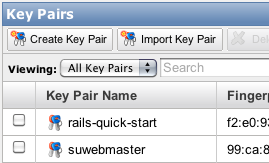 You also need to change the permissions so that only you can read it.

Creating an EC2 Instance with Knife

You’re now ready to create an EC2 Instance with Knife.

This will fail when it attempts to bootstrap as you need to give the bootstrap command the --sudo option, which apparently knife ec2 server create does not support. (Sometimes works, sometimes doesn’t!)

The options are similar here; just insert your IP address and your instance name after the -N option.

You should now get a load of output which will hopefully set up your instance. Once its finished, check your AWS Console to see the new instance.

Right click the instance and choose “Connect”. Use the instructions to SSH in to your new instance.

Now run sudo chef-client. This grabs your roles and cookbooks from Hosted Chef and applies them to the machine. You can set this up as a Cron job to run periodically if you want.

After this completes, check that /etc/apache2 exists.

If it does, open up your browser and paste in the “Public DNS” address of your EC2 instance. You should see the default apache welcome page. Congratulations, we’re done! 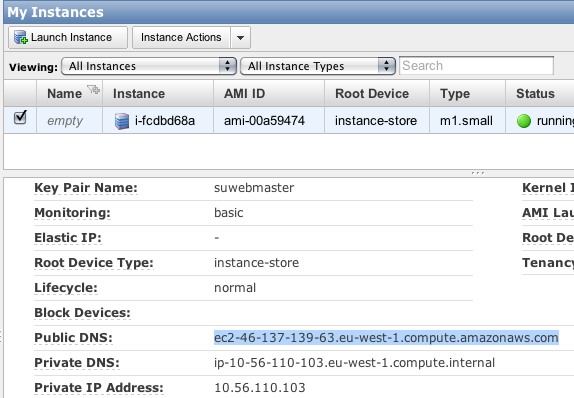