Book Notes – Are Your Lights On? 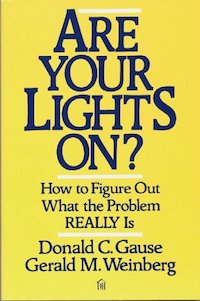 Who has a problem?

A problem is a difference between things as desired and things as perceived.

Don’t bother trying to solve problems for people who don’t have a sense of humor.

He had completely solved the problem in less than 5 minutes; How did billy solve it?

Don’t take their solution method for a problem definition

If you solve their problem too readily, they’ll never believe you’ve solved their real problem.

Moral issues tend to melt in the heat of a juicy problem to solve.

Chapter 6. Billy Back to the Bidders

You can never be sure you have a correct definition, even after the problem is solved

Don’t leap to conclusions, but don’t ignore your first impression.

What is the problem?

You can never be sure you have a correct definition, but don’t ever stop trying to get one.

Each solution is the source of the next problem

The trickiest part of certain problems is just recognizing their existence.

If you can’t think of at least three things that might be wrong with your understanding of the problem, you don’t understand the problem.

Designers, like landlords, seldom if ever experience the consequences of their actions.

Test your definition on a foreigner, someone blind, or a child, or make yourself foreign, blind, or childlike.

Each new point of view will produce a new misfit.

Chapter 9. Landing on the level

How could we change the problem statement to make the solution different?

What am i solving?

As you wander along the weary path of problem definition, check back home once in a while to see if you haven’t lost your way.

Once you have a problem statement in words, play with the words until the statement is in everyone’s head.

Chapter 11. Smoke gets in your eyes

Don’t solve other people’s problems when they can solve them perfectly well themselves.

Chapter 12. The campus that was all spaced out

Try blaming yourself for a change—even for a moment.

Chapter 13. The lights at the end of the tunnel

If people really have their lights on, a little reminder may be more effective than your complicated solution.

In the valley of the problem solvers, the problem creator is king, or president, or dean.

Chapter 17. Examinations and other puzzles

Where does the problem come from?

In spite of appearances, people seldom know what they want until you give them what they ask for.

Not too many people. in the final analysis, really want their problems solved.

Do I really want a solution?

When we contemplate problems, items to which we are habituated tend to be omitted from consideration.