Balancing a Maker and Manager Schedule

This year its been quite tough to hit the right balance between focused dev time, time for the general admin around running a project, and having time to think further ahead about upcoming work and better ways of working.

To try to do something about this, I designed a schedule that I’ve actually managed to stick to with reasonable success! 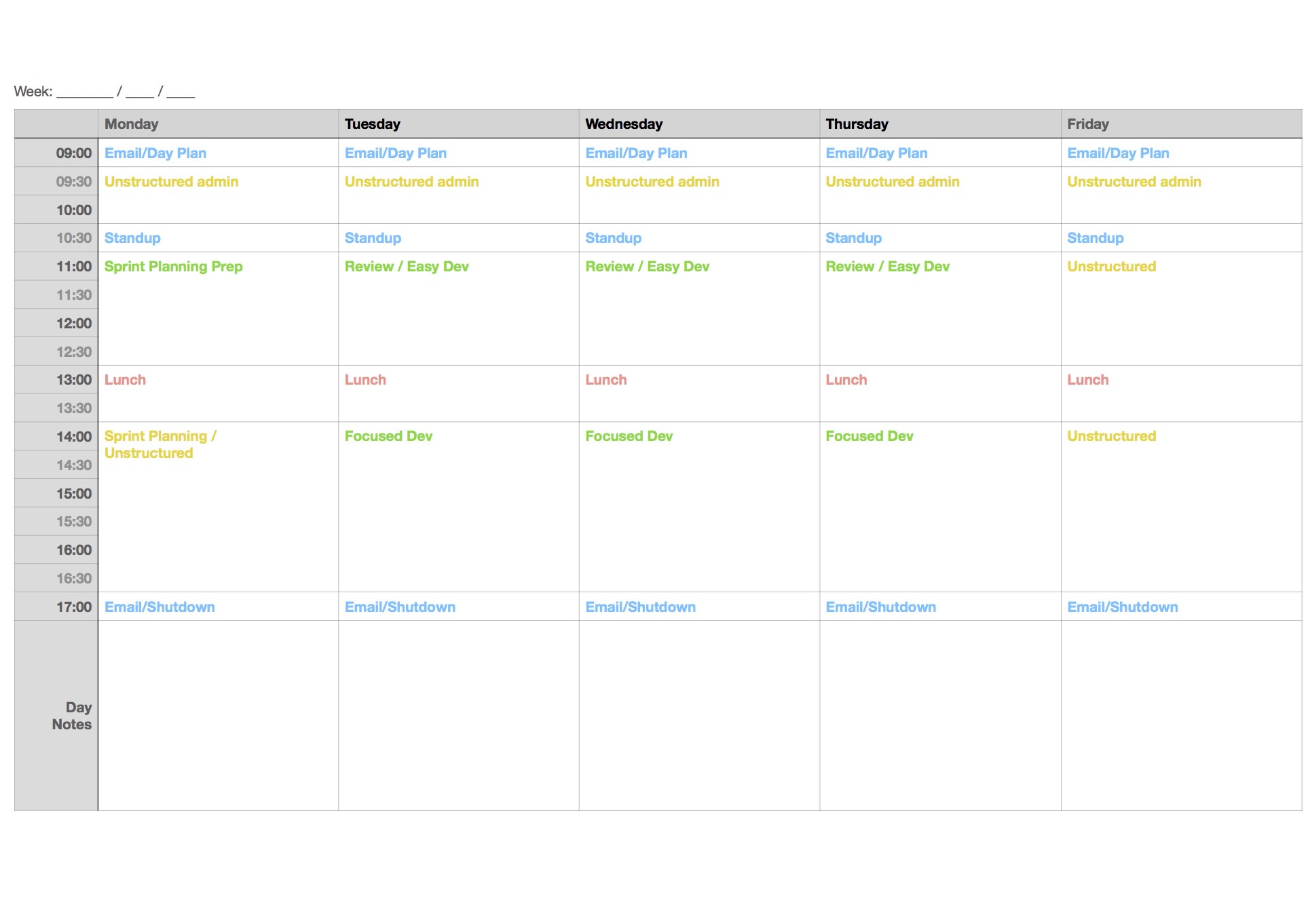 First I’ll just elaborate on each of the themes, then explain a bit about how I think its working so far.

I think in the past when I’ve tried schedules, I’ve failed at sticking to them because I’ve tried to plan too much (i.e. the whole week) in advance. I think one of the main reason’s its been working for me this attempt is because I’ve only blocked out chunks of time, rather than scheduled exact work.

I only assign tasks to the time chunks in the morning when I do my “day plan”. This means that if a day doesn’t go to plan, I’m not fighting to get back on track the entire week. I think this “work debt” is a recipe for getting pretty frustrated and burnt out.

I’ve been pretty aggressive in sticking to the schedule. If I can’t finish what I’m doing in the given chunk, it’ll have to wait until the next day. I was a bit unsure of this initially as I was concerned about context-switching cost. In reality I’ve found it quite liberating. Even if I don’t finish something in a given time chunk, I’m fairly confident I can finish it off the next day. Previously I would want to stick with something until it was done because I didn’t know when I would get chance to work on it next. This meant that the work we scheduled in sprint planning always came second to reactive tasks, even if longer-term the planned work is much more valuable. Now I feel like both types of task are getting a fair chance. I sometimes deviate from this if there’s something really important to do, or if sticking with the task will unblock someone else.

I want to improve the unstructured time. At the moment it feels a bit too unstructured, and I end up just reverting to more dev or review tasks because they’re clearly defined and easy to get on with. The kind of work I want to do here is to think more strategically about the next sprint or two, and work on removing unknowns so that when it comes to sprint planning, we can just assign tasks out and get them done, rather than spending half the sprint figuring out the problem.

I’ve been printing the planner while I get used to the schedule, but I’m beginning to internalise it and just plan my day with the schedule in mind.

I haven’t really blocked out time in my calendar for the focus time, but I have mentioned to the FOI team that I’m following this schedule, and (tried to!) make it fairly clear in standup about when I’m doing specific tasks. It’s definitely something worth considering though.

So that’s it really. Writing down something like this always makes it sound like far more process than it actually is. In reality, it’s just adding a few checkboxes to my notebook and scribbles of the things I want to do. YMMV, but I’ve found I’ve had far fewer days where I’ve felt like I’ve done loads but achieved nothing.