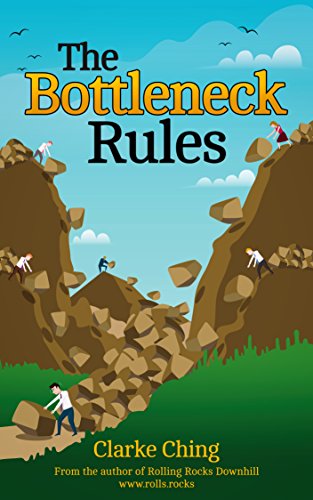 Wild bottlenecks are often hidden and they’re either unmanaged or poorly managed. We find, then tame them using the FOCCCUS formula. Tamed bottlenecks don’t have as much capacity as we’d like, but they are visible and they are managed.

There is a common, intuitive belief that the way to maximise productivity is to keep everyone busy. That’s wrong.

if your team runs faster than your bottleneck, they’re just being busy, not productive.

When looking for bottlenecks you don’t look for the step that takes the most processing time (the egg); you look for the longest queue (the toaster).

We need to adjust our production flow so that the entire kitchen runs at the speed of the toaster.

they could coordinate their staff’s rosters slightly differently and free up more of the toaster’s peak-time capacity.

We should expect that the bottleneck will move and think about where it will move to (and how to react).

In some cases, rather than just follow the bottleneck, we might choose where we want the bottleneck to move to, then make that happen.

Find, Optimise and Upgrade—work on the bottleneck directly. Coordinate, Collaborate and Curate—ask how the non-bottlenecks can help the bottleneck.

A deliberate bottleneck is designed to deliberately limit the flow through a system.

we can place a deliberate bottleneck at the start of a process, and choke, restrict, or throttle the flow of work into the system so it the entire system runs at the speed of the bottleneck. If we don’t do that, our workplace fills up with half-done work that’s queuing up waiting for the bottleneck. That’s when things get messy.

Sometimes, doing something less efficiently is more effective. It seems counterintuitive, until you know about bottlenecks.

That hopper full of cooked shellfish was what we call a buffer. It protected the rest of the factory from running out of work. Normally, it’s placed right in front of the bottleneck, but in this case, it was at the beginning of the process, where it also acted as a deliberate bottleneck.

If he didn’t keep that hopper full, then the whole factory would be starved for work

The factory owner’s genius was in the fact that he recognized not all of his staff had the broad view of his business that he did. So, he created a few simple rules to help them run their parts of the “car” in a way that kept the entire factory running smoothly.

The curation step in the FOCCCUS formula is often the most powerful, but also the most neglected. It helps us make sure we are pushing the right work through the team given where their bottleneck is.

Right-stuff bottlenecks are tamed, and their work has been properly curated so they are working on the right stuff.

During the last step in our FOCCCUS formula, Start Again (strategically), we think

Right-place bottlenecks are not only tamed, but they are where they’re supposed to be.

Sometimes, people think that being a bottleneck is a bad thing, but this was a deliberate, strategic choice to Upgrade the capacity of the team around a strategic bottleneck: Dr. Petri.