Book Notes – Notes on the Synthesis of Form 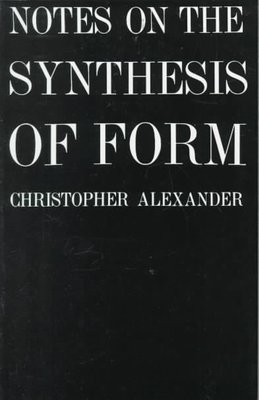 Conflict and Agreement: Different attributes of a form will compete against each other. Similar idea to the Good/Cheap/Fast problem. Performance is usually in conflict with economy. Simplicity is usually in agreement with ease of construction.

Form and Context: The Form is the part of the world which we have control and which we decide to shape while leaving the rest of the world as it is. Anything in the world that makes demands of the form is context. A chair is an example of a form, and the room it will be used is the context. The boundary between form and context is movable. Rather than the problem definition being “design a chair”, we could think of the problem “a space to sit in the room”. This allows us to consider alternative forms to solve the problem, like a built in window seat, a bench or a sofa.

Forces: Forces are the mechanisms in the context that make demands on the form, and therefore influence the design of the form itself. A seaside house will have physical forces put upon it – strong onshore winds and rain – but also more fuzzy ones – the inhabitants’ desire for a picturesque view. Most situations will have too many forces to fully comprehend. Identifying the forces that make the greatest demands is the task of the designer so that the final form achieves good fit with its context.

An introduction to Order – Fit and Misfit: Similar to conflict and agreement, but evaluating the form against the context. Fitness is achieved when there is a harmony between form and context. In the context of a suit, one particular tie might be a misfit if the pattern clashes with that of the shirt. A plainer tie might achieve good fit.

Fitness: You can’t look at a form in isolation to know if it’s good; you have to look at how it performs in any given context. Most design problems are complex enough that it’s almost impossible to describe good fit. The process of identifying good fit is actually a negative process of removing issues which cause misfits.

Unconscious vs Self-conscious process: Unselfconscious process is the slow process of adaptation to a changing context by eliminating misfits. Self-conscious process is applying existing concepts to forms, and incorrectly assuming misfits are caused through deviation from the concepts, rather than through a misfit with the context. This seems common in generic enterprise software providers. They attempt to apply their CRM tool to all problems that appear to be a CRM problem, but users are never happy with the results. It is assumed they are using the system incorrectly, rather than the system itself being incorrect. An unconscious process would develop over time as the relationships increase and change in style; perhaps starting on paper, then moving to a spreadsheet, to developing context-specific software to meet the users’ needs.

See Designing with Forces: How to Apply Christopher Alexander in Everyday Work for a practical example of applying these ideas in the context of software design.