For the last 3 months I’ve been using The Archive for taking notes on and summarising content that I’ve read, watched or listened to.

I recently wrote to Christian (The Archive author) about a minor question I had about the app, and noted that I’ve written more in first 2 months of use than I have probably in the last 2 years. 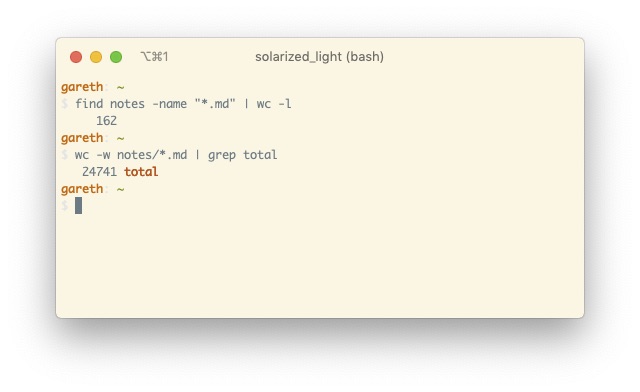 Christian then followed up on that…

Hey, that’s cool! How come that you produce so much more, though? :)

That’s been a tricky one to answer.

I guess the main thing is that I now have a good system and a good place to put notes, and the system is well designed to prompt the creation of new notes.

It started with a feeling of wasted time. I’d read lots and remember maybe 1% of it. I’m sure lots of it sinks in in the background and eventually helps shape how you think, but I think I was just finding that making use of information is almost wholly reliant on my memory.

I’ve sporadically written up book notes, and I do find I refer to them quite often. It goes something like “oh, didn’t X mention something about Y?” and sure enough, I’ve got some notes that I can work into whatever email I’m writing that needs to make a point about Y.

At some point I came across zettelkasten.de. I spent ~6 months (on and off!) reading various posts on the blog and forum, and watching the YouTube channel. By the time I bought The Archive I had a good mental model of how to use it.

I think a critical aspect of my increased output is that The Archive gives a sense of place for “my knowledge”. I’ve tried various forms of digital notebooks but could never make them stick. I think I like the mental separation of different apps for different things, so opening ~/notebook in the editor I use for programming just didn’t quite feel right.

The Zettelkasten system is what makes The Archive really shine though. I think had I not learned so much about it before trying to use The Archive I wouldn’t have had such great results. Now, my default mindset when consuming new content is “feed the Zettelkasten”. The Archive makes that easy because there’s a clear place to go to do that, and it makes system-specific actions really quick and easy.

All this has culminated in a reduced reliance on memory for making use of the information I’ve consumed. Of course I need to remember roughly that I have some information on a topic, but I can feel my trust level increasing that I have actually written stuff down that I think will be useful in the future.

As I’ve been using the knowledge in writing I’ve noticed that the pattern is now more about integrating existing notes rather than trying to write from scratch every time.

I’m not sure I’m synthesising sources as well as I could be, but even having raw notes in one place has prompted me to extract individual concepts and create structure notes that help distill ideas into reusable summaries that help convey the core concepts of sometimes quite large primary sources. 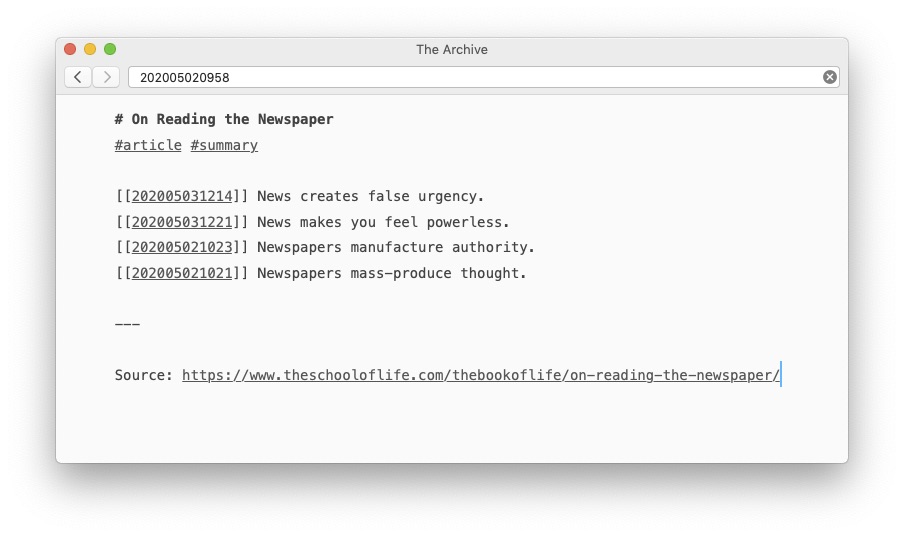