The course focuses on the work of Christopher Alexander, an architect who’s ideas have influenced many major software movements – structured programming, design patterns and the wiki to name a few.

The seminar not only focuses on the construction of software itself, but also how software can be used to improve the external environment of those it affects. The Software track is taught alongside a shortened, online version of the Building Beauty core course – a hands-on architecture-based course around Alexander’s published works.

There are four parts to the course:

Here’s what we did this week.

Studio is the hands-on part of the course where we start small and get bigger in terms of scale and complexity. The idea is that the principles apply at each level of scale.

Over the course there are 4 projects:

The main discussion was around the question of “what is ornament?”

Lots of people think of ornament as an embellishment, rather than integral to the form, but it’s not.

There are 4 key attributes of ornament:

Someone noted that to them ornament had a negative connotation initially. They perceived ornament to be fussy and unnecessary. I had a similar initial perception. Now I appreciate that ornament is not just trinkets on a shelf, but actually parts of the fabric of the environment – skirting boards, mouldings on doors, etc. Specifically, ornament – according to Alexander – is not just trinkets and trays, etc. It has to be part of a larger context.

We also made some clay tiles, which was tricky! I was expecting the clay to be quite soft, but it was actually quite a bit firmer.

I was hoping to use a tile adhesive applicator to make some interesting curved patterns, but it just wouldn’t cut through the clay. 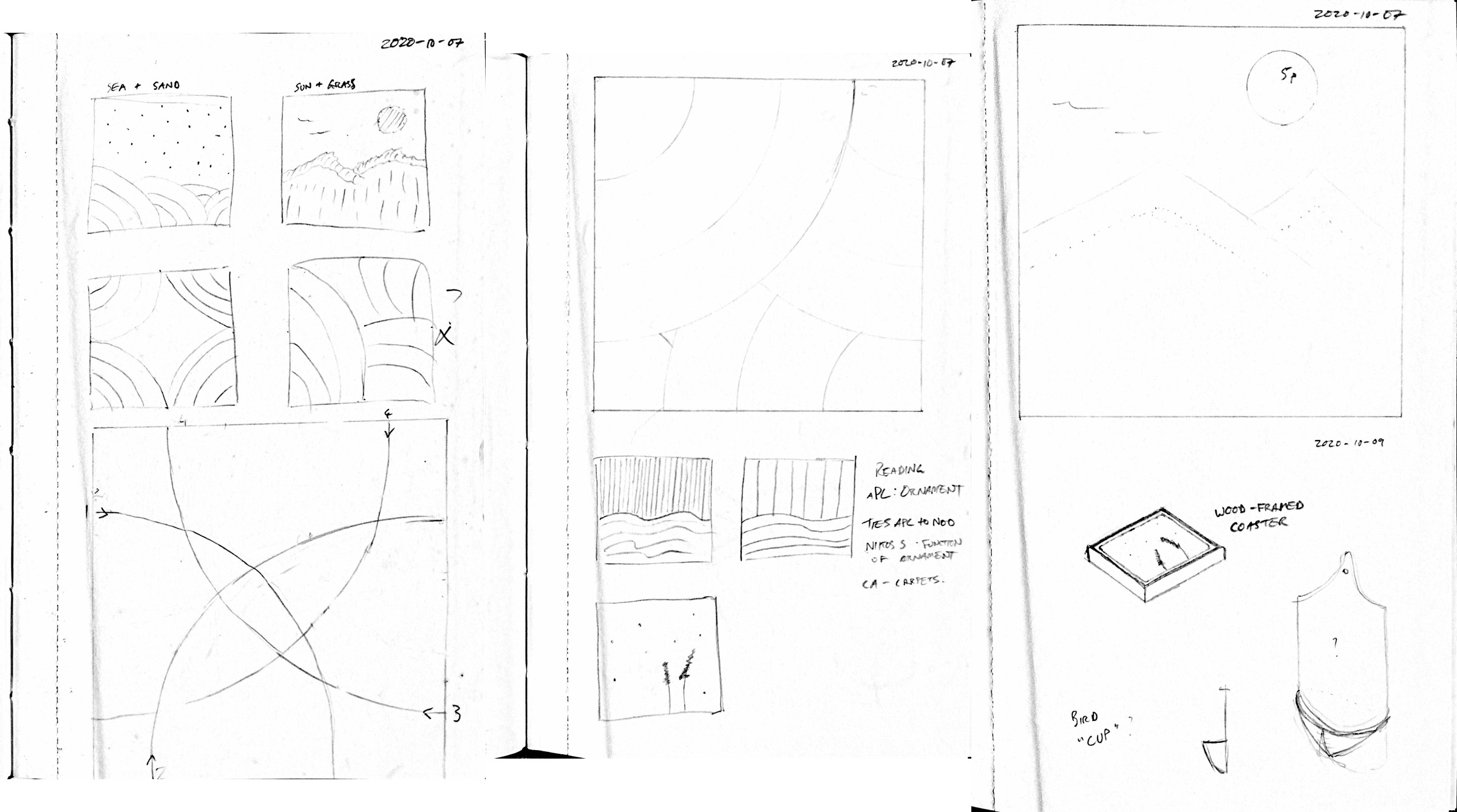 I tried making a mountain scene. I wanted to press the terracotta clay into the white clay to make a smooth finish. Didn’t come out as nice as I wanted, but I liked the texture on the mountain tops from pressing a piece of wire into them. 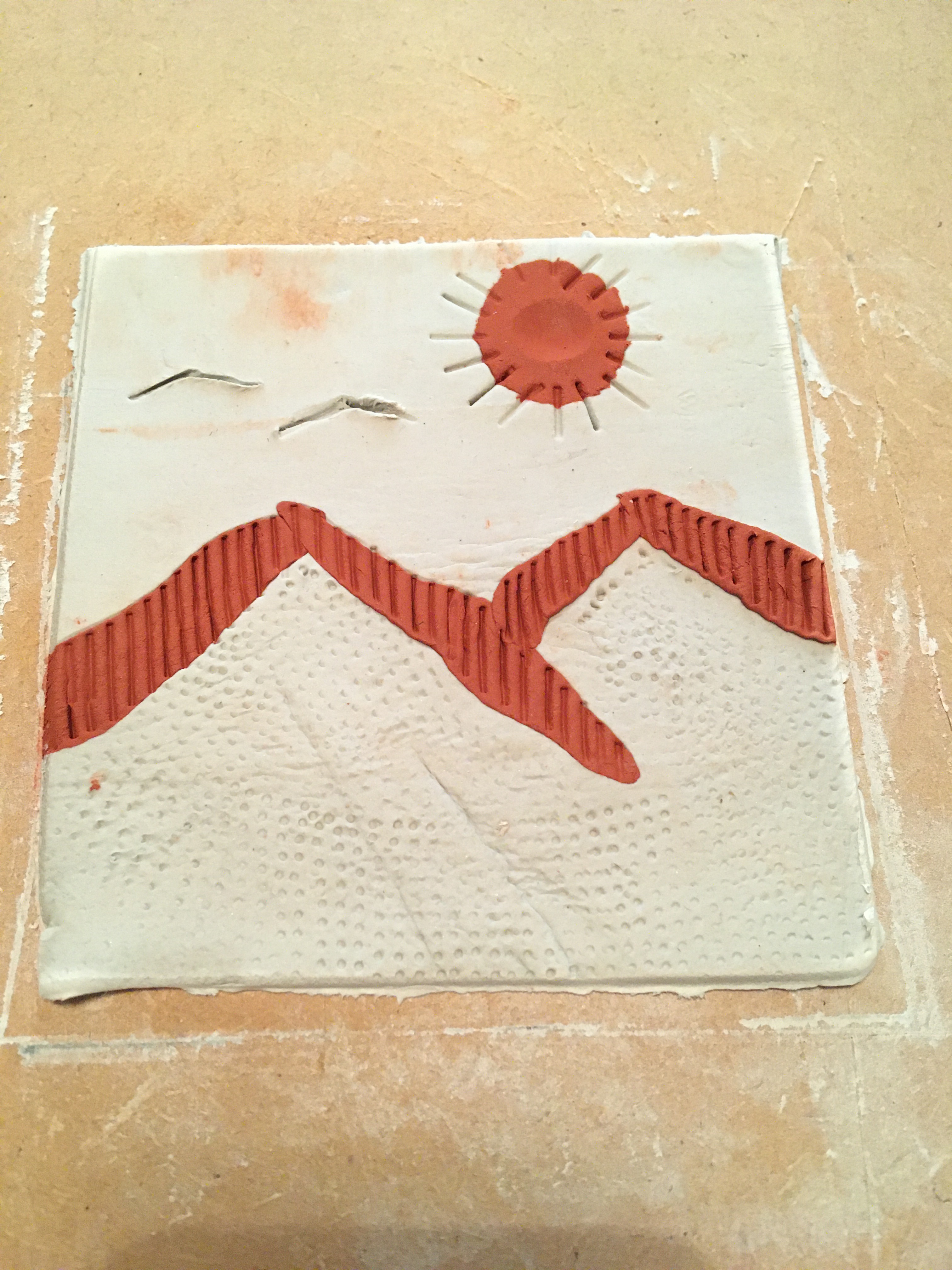 Our garden has some lavender plant and in summer the bees love it. For this tile I pressed a few stems into the clay. Along with the curves of the stems, this made a nice deep impression which gives the tile a lot of life. I poked some small holes around the lavender to represent the bees. I think this one would look pretty nice glazed. 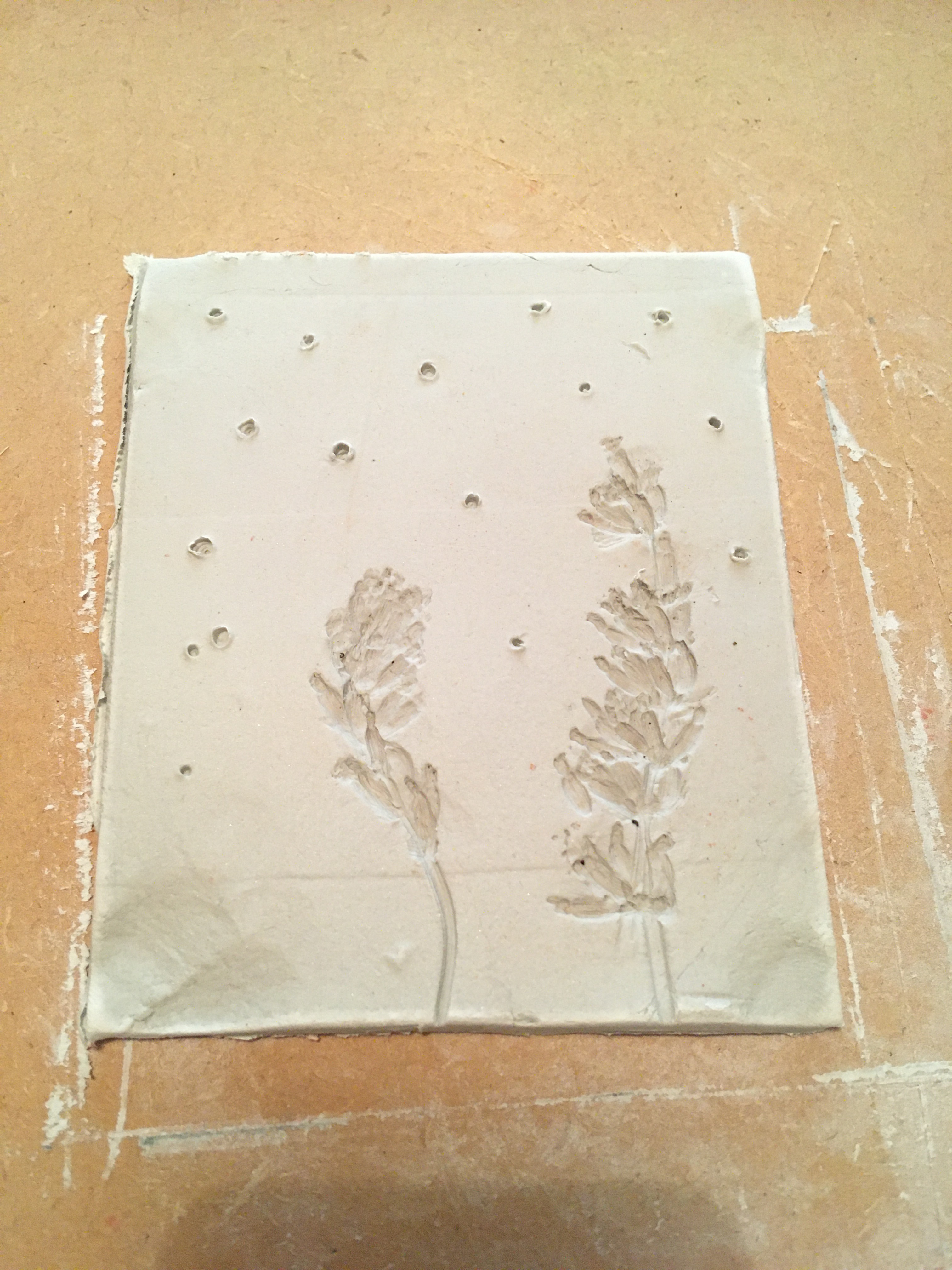 The main theme of the book is wholeness.

We covered Alexander’s journey to Nature of Order via his previous works.

Notes on the Synthesis of Form: Resolve each subset of problems and then synthesise them into a whole. Actually didn’t work very well because the whole is more than the sum of the parts.

A City is not a Tree: Explains why the approach of Notes failed. Cities don’t only have vertical connections between subsystems; they have horizontal connections as well as vertical. Example: In Bologna there are some major streets, minor streets and alleys, but the interconnection between the streets are not necessarily hierarchical. Can go from the smallest of alleys to the largest of streets.

The Timeless Way of Building: You sever crucial connections if you think of the systems as hierarchical. It’s a book about architecture, but focuses on people and events.

A Pattern Language: Essential insight is that within all of the complexity of life, there is a limited number of patterns that will allow you to recreate the complexity. They’re organised by level of scale, but also interconnected. Sequence the patterns, then start building.

The Oregon Experiment: Application of A Pattern Language and more organic production process. Alexander became uneasy about the geometry of the buildings produced – they didn’t have the same strength and quality of traditional examples. Tried to understand the geometry of good buildings from a study of carpets.

Nature of Order: Up until now he dealt with the human issues – the connections between humans and the social and spacial connections in architecture, but hadn’t dealt with the form itself. How do you create a form that has feeling?

The Quality Without a Name: Any other word would not encompass it completely. Can often be experienced unconsciously. It’s the quality we feel when we feel most alive. In Nature of Order the term gets transformed into 3 terms: Wholeness, Beauty and Life. Alexander mostly uses life as the key property.

What unifies them all is an understanding of the built environment as a complex whole, and the need of any form we create within the whole to be as free as possible from internal conflict and contradictions.

If we’re making an arcade we can apply some general patterns, but there are still loads of details that need to get figured out when we get to building. How do we make these choices?

During his work he ran up against 2 major obstacles to building with life:

You can only make wholeness when 2 things happen at the same time:

We were asked to bring images of 3 things we thought had life. Here’s what I chose: 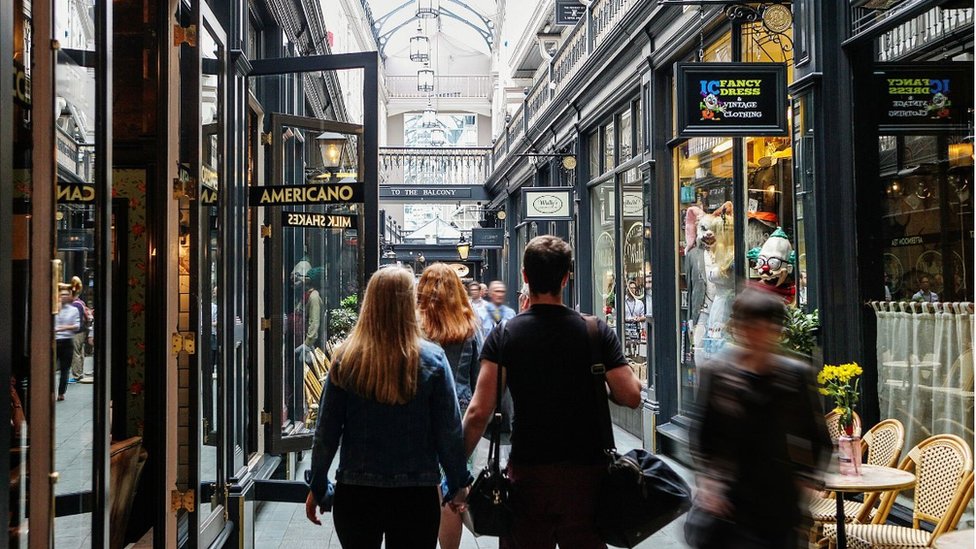 Cardiff has a few 1800’s era arcades that are amazing to walk through, so much so that I often go a little out of my way to walk through them. They’ve managed to retain well kept original – or at least original style – shopfronts which makes the arcades seem timeless. The lighting in them is really soft which makes them feel movie-like. 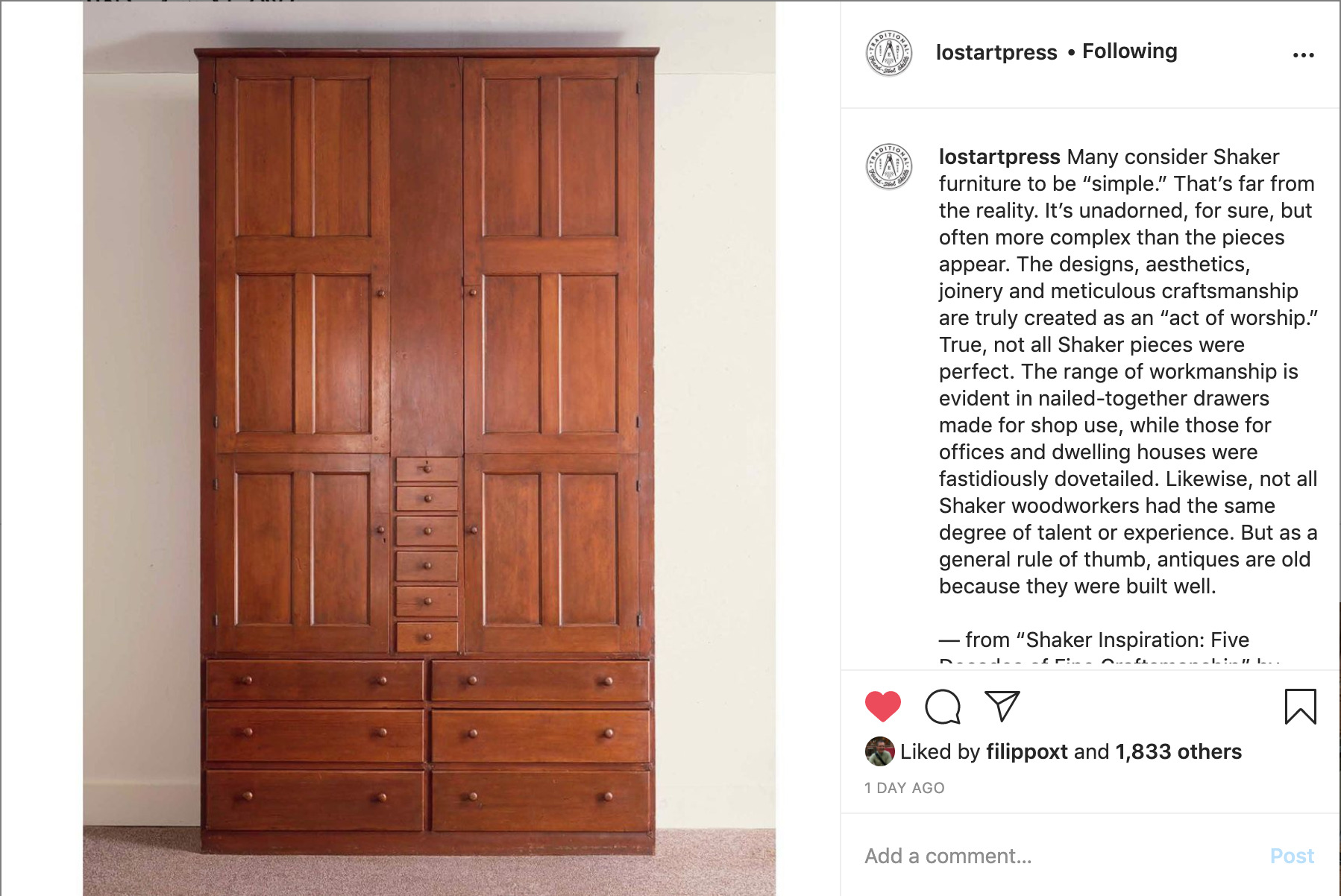 I think this cabinet has lots of life because even though it initially appears simple, the quality of materials and construction makes it feel much more alive than a mass-manufactured equivalent. There’s a slight roughness and gradient due to the natural wood, and the groups of 6 (6 panels win the doors, 6 small drawers, 6 large drawers) have echos and of alternating repetition. I also liked the comment about unadorned objects not necessarily being simple. 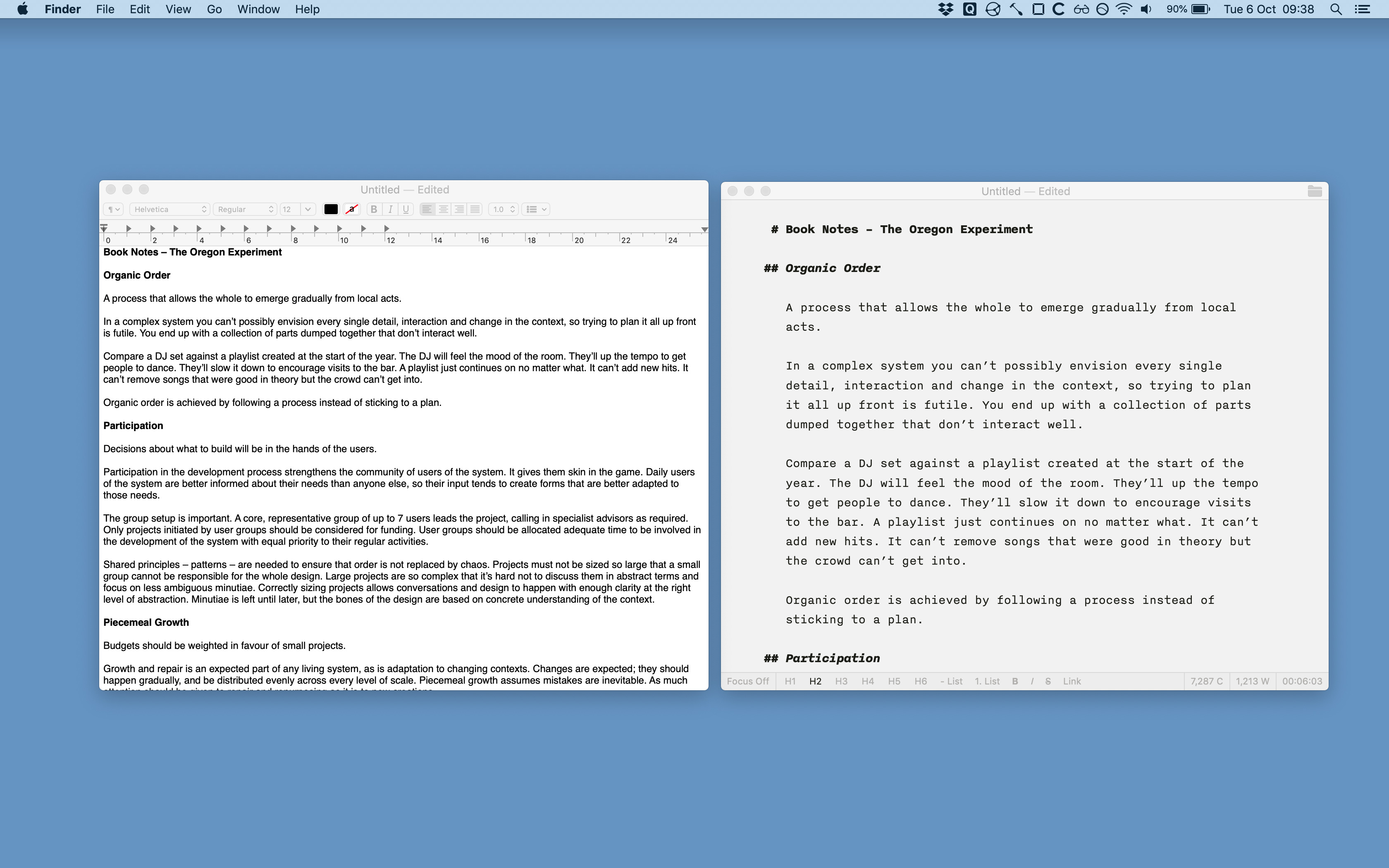 Being a computer person, I had to throw one of these in. Text Edit (left) is the default text editor on macOS. iA Writer (right) is a crafted editor. Both show the same contents, but I feel iA Writer has so much more life to it. It’s unadorned like the shaker cabinet, but the nuances of the background, fonts, and user interface make the writing feel much more intentional. It’s hard to describe, but I feel inspired to write when I open iA Writer, but in TextEdit words feel meaningless.