We’ve been covering two main themes in studio this week; the furniture project, and the (academic) year-long individual project.

The furniture project is a step up in scale compared to ornament. The idea is that we see how the ideas apply at projects of all scales and complexities. This time, we’re going through an explicit process of sketching, small scale mockups, full scale mockups and then building for real. This isn’t a totally linear process though; we’ll adjust as we go, so you might be building for real and then fall back to a sketch or mockup to get a small element of the project just right.

The individual project is the most complex project we’ll undertake. The idea is to do work in our communities, or with a community. The first term is mostly about finding your sense of self, with the second term about helping others do the same. Logistically this will be difficult given the pandemic.

We’ve been covering the “Mirror of the Self” test this week. This has been a tough concept to understand, and frankly, to agree with.

The main theme is that while the 15 properties do describe fundamentals about life in spatial arrangements, they’re only half the puzzle. The other half is how the form makes you feel. Intuitively I understand this. Shaker furniture can still have life, more life even, than a highly ornamented but poorly executed equivalent.

The test is a comparison of A vs B. A salt shaker vs a ketchup bottle; an axe vs a screwdriver; two different doorways; etc. The test is not about which the observer likes more, but about which generates the most wholesome feeling. “Which is more deeply connected to your eternal self”?

I make it clear that I am asking which of the two objects seems like a better picture of all of you, the whole of you: a picture which shows you as you are, with all your hopes, fears, weaknesses, glory and absurdity, and which – as far as possible – includes everything that you could ever hope to be. In other words, which comes closer to being a true picture of you in all of your weakness and humanity; of the love in you, and the hate; or your youth and your age; of the good in you, and the bad; of your past, your present, and your future; of your dreams of what you hope to be, as well as what you are?

Some of the tests are quite tricky, in the sense that it is not initially obvious which is best. Alexander believes that the Turkish Tile has more life than the Persian bowl, for example, and even though we are attracted to the bowl more at first, he considers that the blue tile has more “staying power”.

He does say that Mirror of the Self is not a test he tends to use in day-to-day work, since it is “a little too exotic… and a little too eyebrow-raising for everyday professional work”. He has a list of of various phrasings he uses.

Alexander suggests that a new form of science is required where we take our feelings into account when making empirical observations. I don’t disagree here; there’s something unexplainable that happens when you enter a room with life (as Alexander describes it) or when you use a tool that feels just right for the job at hand (like a nice mechanical keyboard vs a cheap £5 thing).

He says that it takes self-discovery and training to hone your ability to recognise this deep feeling. I agree here too. Even though our Cartesian science is based on reproducibility, science is so advanced that you won’t understand how to reproduce most experiments without training. Alexander gives an example of liking one painting more initially, but over time grew to much prefer another one. It’s easy to be wowed by things at first, and then over time discover that they weren’t so great in the long run. I can see how you can develop a better feeling for noticing that sooner.

I’ve yet to be convinced by the implication that this is totally objective. That beneath our cultural biases and idiosyncrasies and things that we’ve been influenced to like (by mass media, etc), there is an objective truth that one form is “a better mirror of the self” than another. People are different, so there’ll always be some who genuinely feel different.

Perhaps a non-majority agreement between A or B is an indication of a failed design. If we’re comparing comparing, say, two buildings, and there’s a near 50/50 split, then perhaps neither are very whole.

I’m sure there’s more to learn on this, and more nuance, but right now I’m struggling to take that claim at face value, even though I agree with almost all of the other parts of the test. 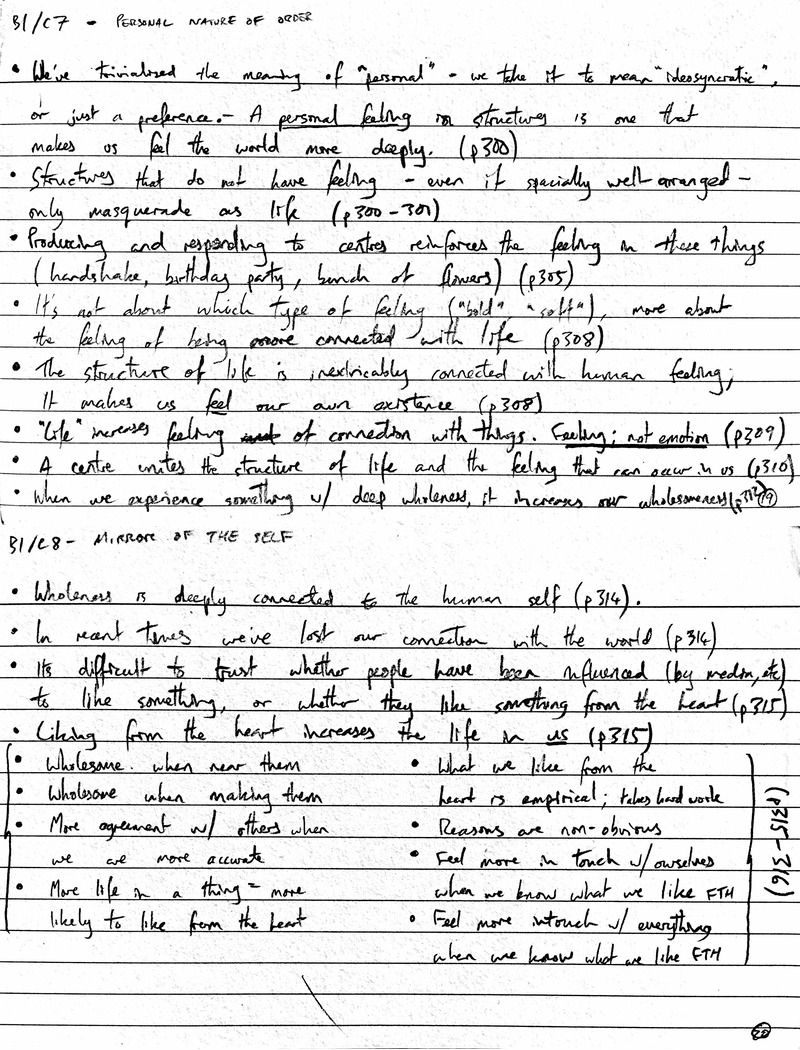 This week was bamboo week. It was pretty interesting how such a versatile (and quite exotic!) material is seen as “poor man’s wood” by those where it grows best. I think this is a common theme around the world, where vernacular gets shunned because some other culture has some other fancy way of doing the same thing. We should celebrate our local materials.

Bamboo is not without its downsides though. It’s as weather-resistant as other materials, so needs frequent maintenance, which requires skill. In the past many people would have had the skills, but those skills vanish as people move to more well-paid jobs in the city.

Bamboo “plywood” is a Thing, which seems like a good advancement, at least on the sustainability side. Ritu wasn’t keen on bamboo ply – she felt it was over-processed – but could see the benefits to it. I actually think it’s good news for bamboo. Given it can directly compete with plywood, it might well get chosen more frequently. Over time, using bamboo will become normalised again, and people might start to re-explore bamboo in its natural form to augment the processed version.

We’re still finding our feet, but Stefan wrote a great piece on the various levels of scale that Alexander’s ideas can be applied in the software field. I think part of the problem is that it’s so difficult to even know where to start out of these!

We’re thinking about making something small and simple to be able to demonstrate the ideas in practice – maybe a simple todo-list type app – though a few more interesting concepts had some discussion.