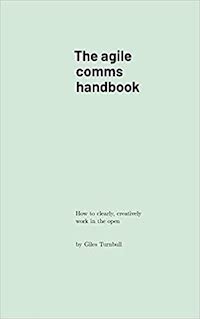 A book inspired by the experience of doing communications in GDS and other government departments. The book is self-published, so buy direct from the author.

I found some of the book less practical than 256 Bloghacks, but this is obviously more directed at “organisations” rather than individuals.

Here are the bits that I enjoyed most.

Your comms strategy should simply be: communicate.

Don’t start with a “comms strategy”, because most of the time, you probably don’t need one. It’s about telling the story as it happens. Good comms describes how you did what you’ve done. Bad comms just says that you’ve done it.

Consider what you’re trying to communicate through each post. The purpose of a post containing some WIP screenshots might be “remind people that we’re actively working on Project X”, or it might be “to temperature-test a new UI direction”. Really understanding the purpose of communication helps fine-tune the three layers.

Most people are too busy most of the time. Breaking your communication into three layers helps people understood quickly and at the right level of detail for their current situation.

Each layer should be considered separately as they have very different jobs. A great context will likely be much more conversational than is appropriate for an authoritative details. An effective lure might not convey the main point of the context, but instead ask a profound question that compels the reader to dig deeper.

A couple of examples:

TV scientists may have published academic papers, but to reach a wider audience they create simplified versions in the form of TV shows, and lure people with their social media accounts and breakfast show appearances.

I’m writing a first draft and reminding myself that I’m simply shovelling sand into a bucket, so that later I can build sandcastles – Shannon Hale

All first drafts are bad. Once accepted, you remove the pressure on yourself to “be a great writer”. Just get the ideas down; others can help you edit.

They also build a catalogue of ideas to pull from. Even if most drafts never go anywhere, in some posts you’ll make connections to past drafts that you can pull in and finally get the idea over the line.

Try to keep feedback on drafts at a really high level. “Make the point earlier” or “try arguing your case from the other side”. Drafts will need to be chopped and changed so much that it’s not worth worrying about formatting and grammar changes. These are usually uncontentious and can be picked up at the end.

At GDS they intentionally made cheaper looking videos to avoid getting hassled for spending public money on slick production.

If you’re not driven by advertising revenue, then who you reach is more important than how many you reach.