We continued with our house project.

In modern architecture it seems it’s common for those designing buildings to do so almost entirely from the office. Some don’t even view the site. This seems ludicrous, but so it goes.

Building Beauty is all about building structures that enhance the site. To do that, we design on the site, and go back to the office simply to record the results.

After analysing the site for basics – size, wind direction, sun path – we identified important centres and assessed which of them were most beautiful, and which could do with some work.

One of the key patterns from A Pattern Language is “Site Repair”, which basically says that you should build on the worst part of the land. This means that you end up with an improved overall site, rather than a nice house with terrible gardens. 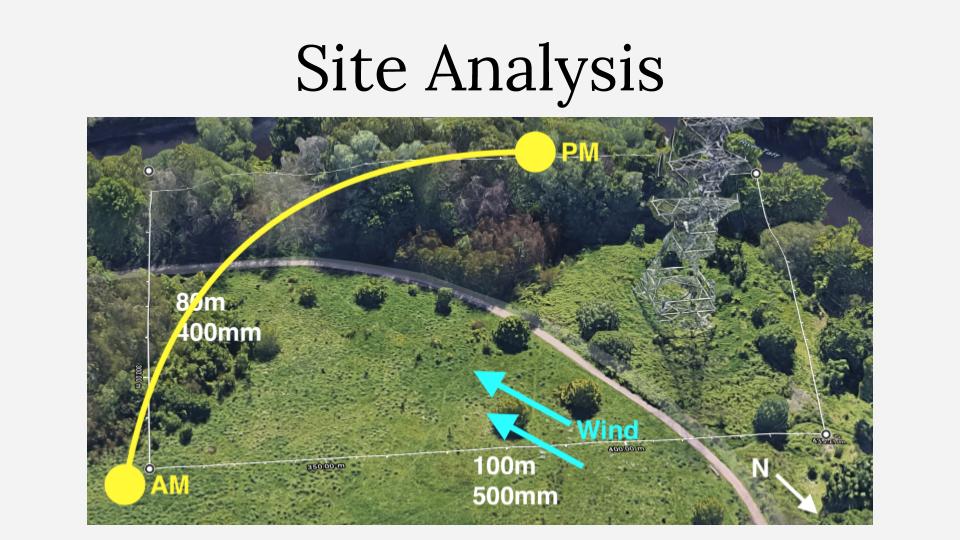 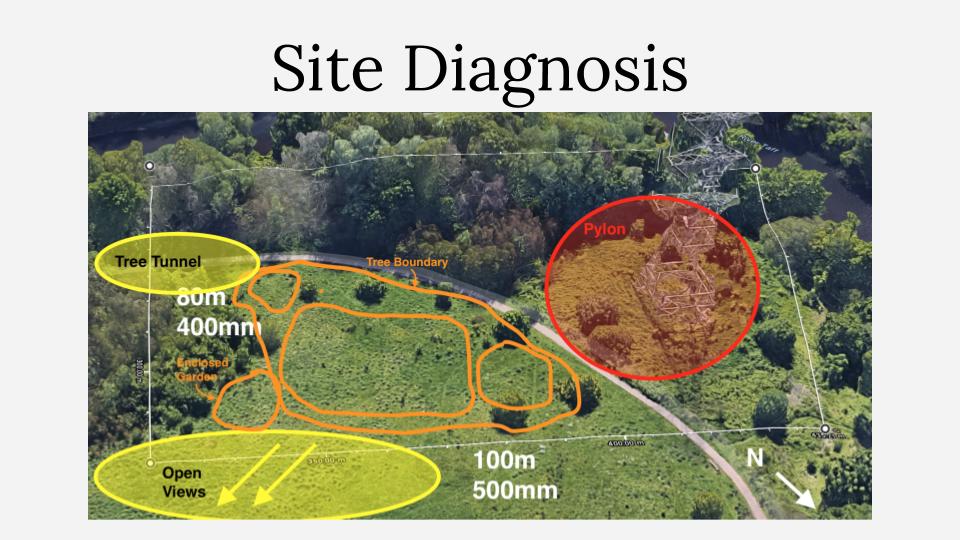 To design the house, we followed a particular sequence of staking out boundaries on-site. First, the garden areas and secondly the main volume of the house. This sequence ensures you follow the Site Repair pattern. 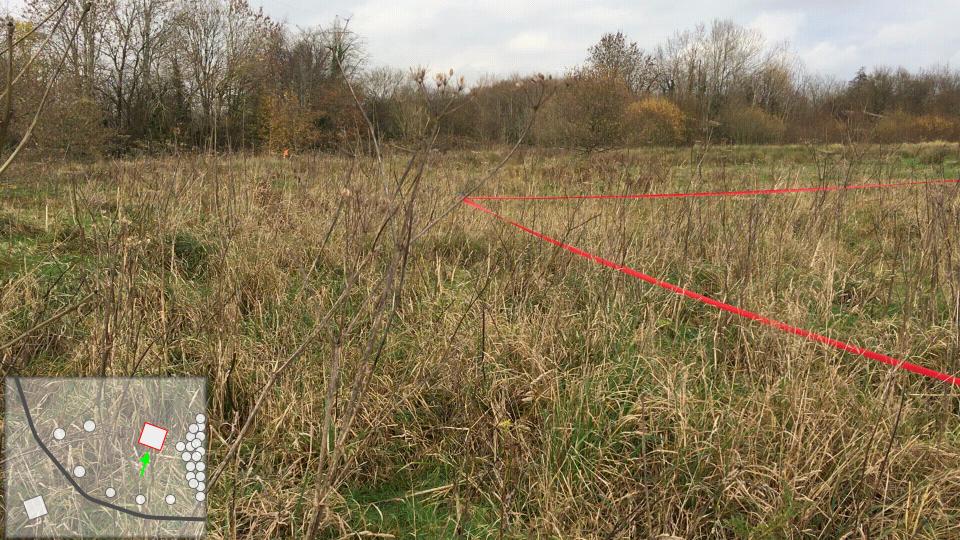 I used the existing path and Tree Boundary to form the garden boundaries, positioning the house to take advantage of the “Enclosed Garden” and “Open Views” centres, and with the entrance emanating from the also-very-nice Tree Tunnel.

Once these areas were represented physically in the environment, measurements were taken and transposed onto a site plan and the 1:200 scale model (My first attempt at scale drawing and measuring wasn’t great – something to improve next time!) 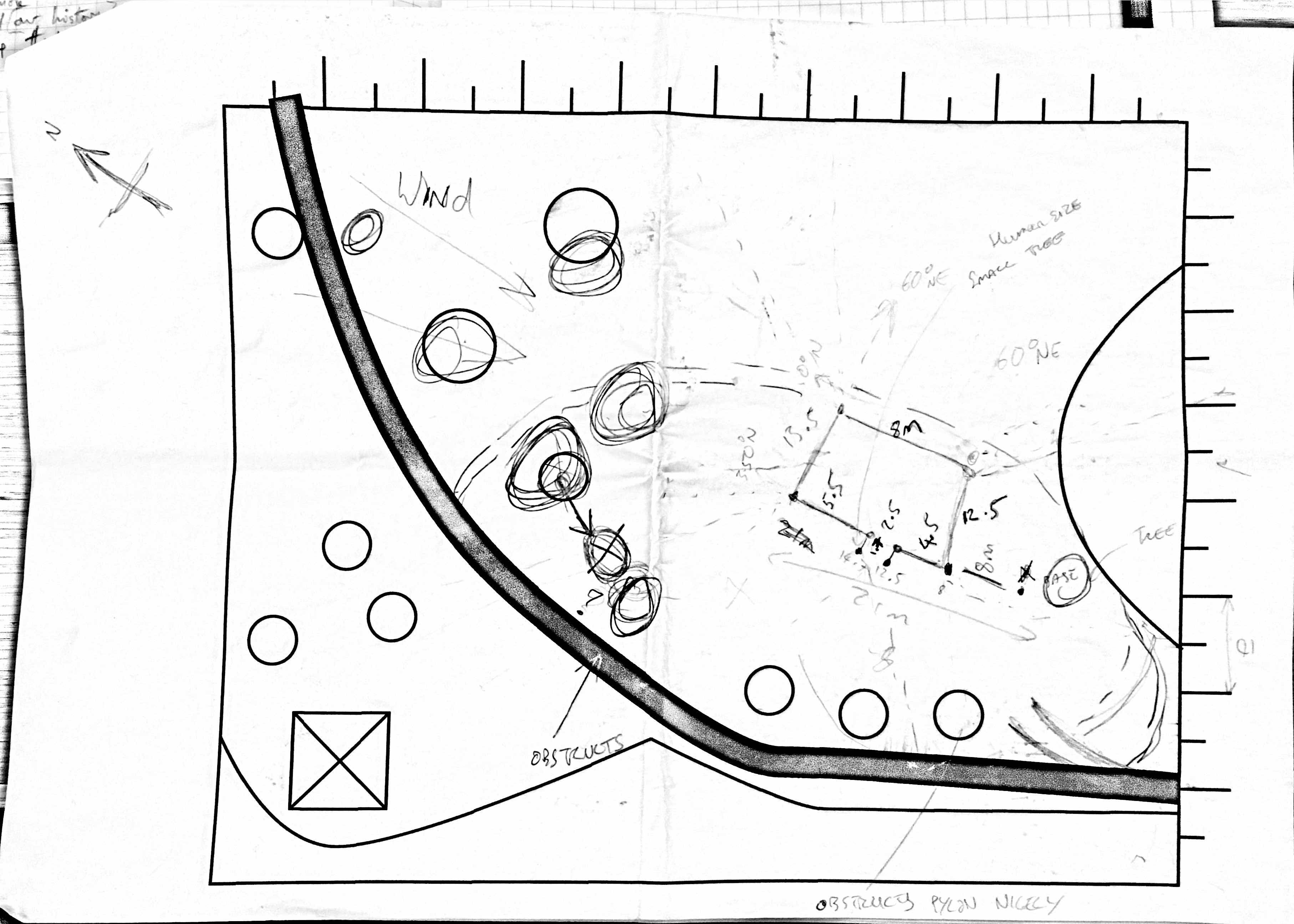 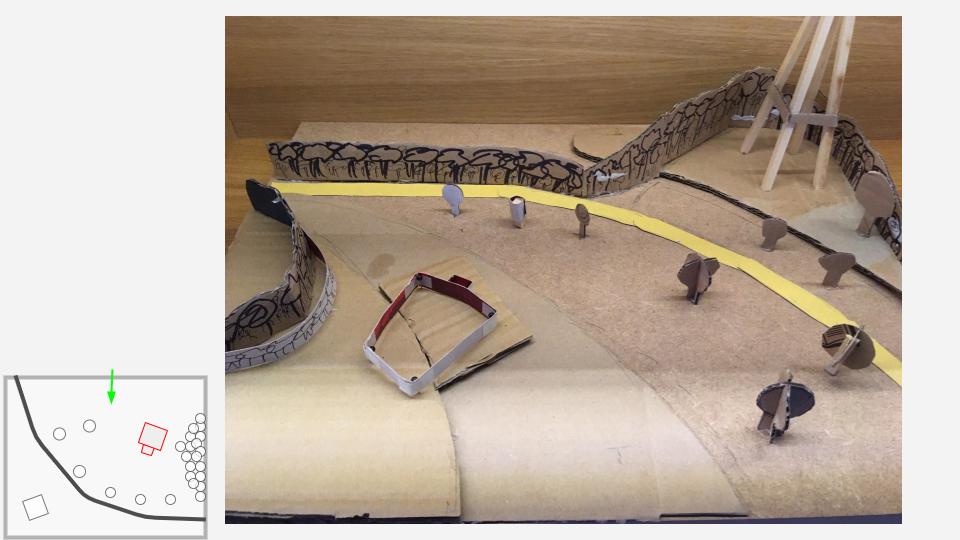 After class feedback and some reflection, on my second site visit I wanted to strengthen the Enclosed Garden centre, so I tried altering the main building shape to better “hug” the lines of the centre.

This resulted in a much more interesting shape for the building, but I was encouraged not to get too wedded to the idea at this stage. The same effect could be created by other means – trees, paths, flowerbeds, etc. Still, it felt like a good example of how small changes can make a building better work with the land around it.

As before, the design was driven by directly interacting with the site, and only recorded on the plan and scale model, rather than drawing it on the plan first. 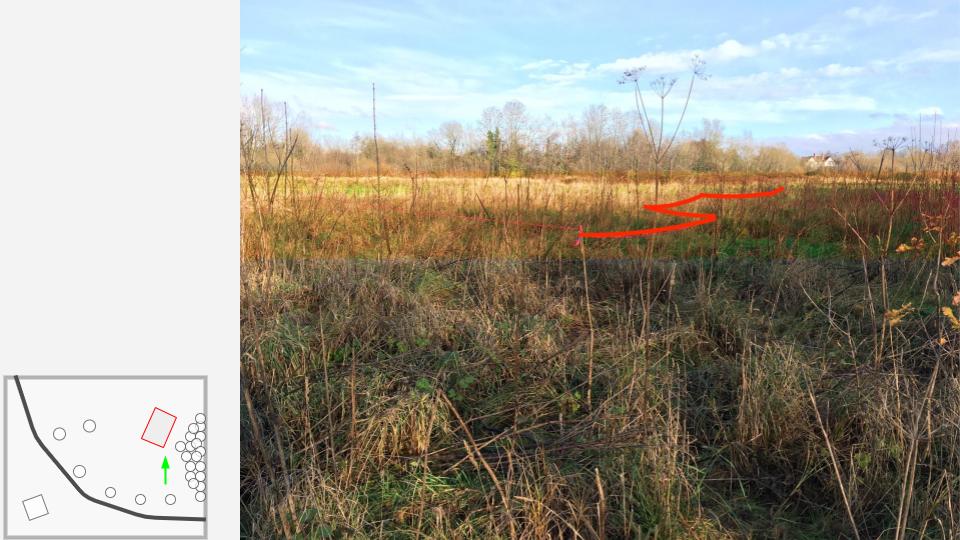 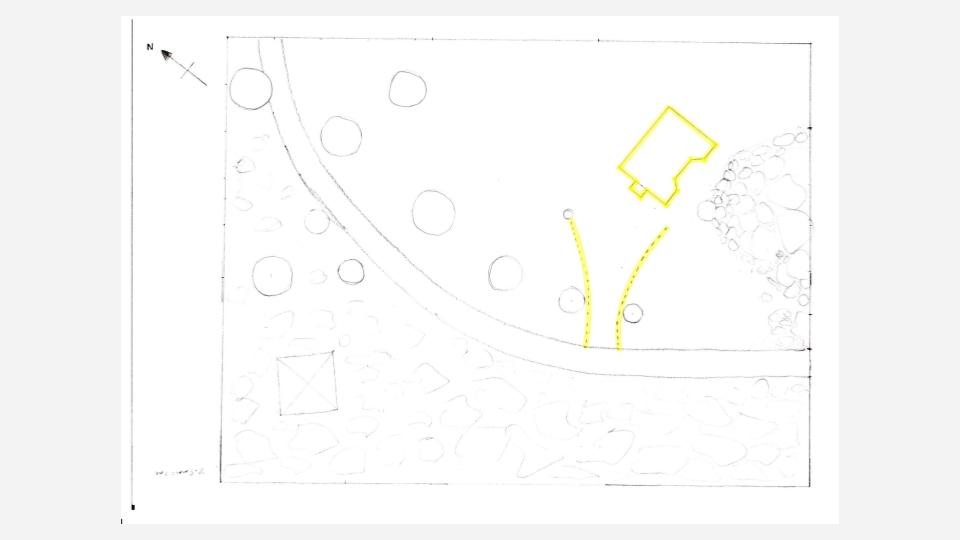 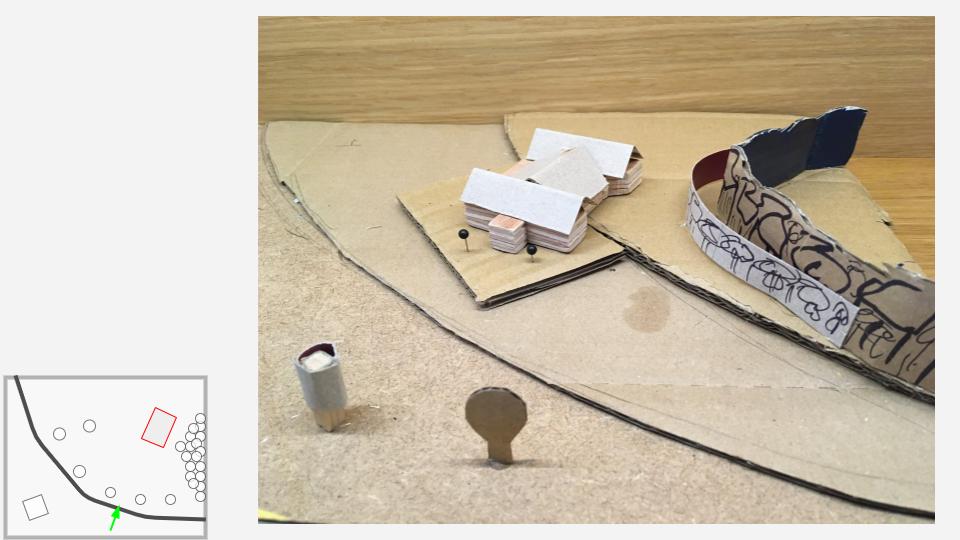 On my second visit I also tried a different entrance route. I’d noticed the gap between trees in the Tree Boundary was rather pleasant, so staked out an entrance route between the trees leading up to the house.

While this gave the entrance a much grander feeling, I’m not sure it resonates with the Jewels and the feeling I was after, so I’ll probably revert to the original location. 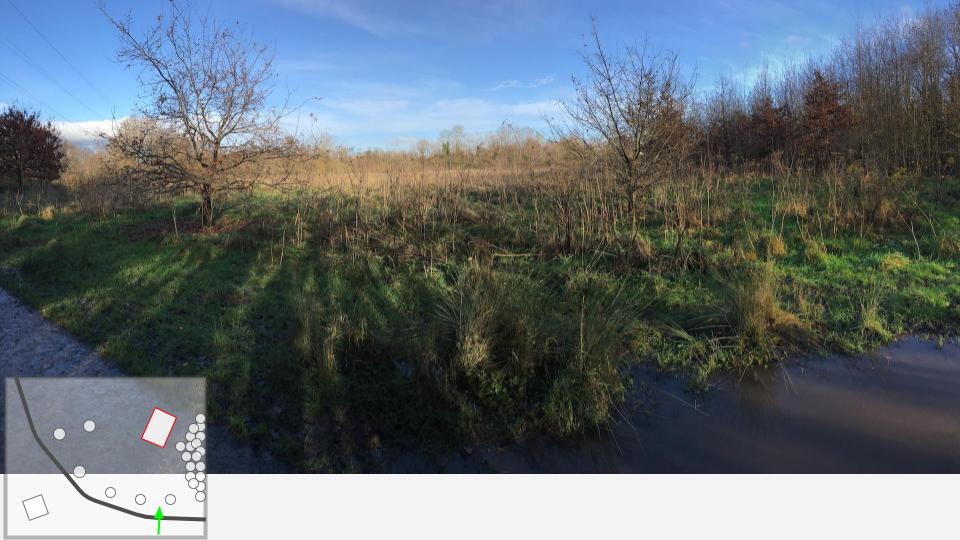 The next task was to stake out the main room of the house. The most natural positioning was at the centre of the house looking into the Enclosed Garden, leaving space for other rooms to enclose the main room. 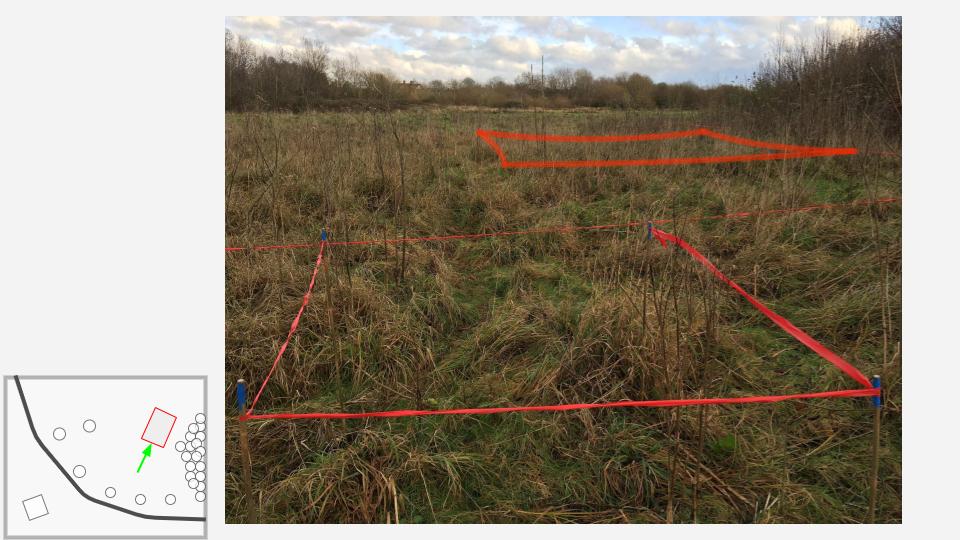 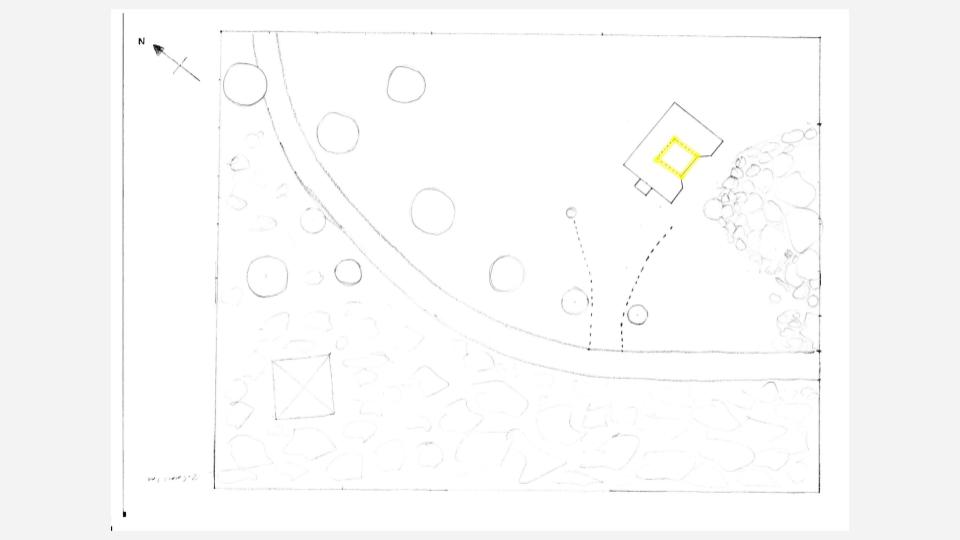 The tutors had some thoughts about this – mainly that you generally want light from two sides – another A Pattern Language pattern – and that it should have the best views, so possibly should be located at the Easterly side of the house.

I’m still thinking about this. I don’t think the “living room” is at the top of the priority list for this house – the Jewels are all about other rooms. Given the house will be single storey, ceiling windows can be used to add light from additional sides. We’ll see how this turns out as we get deeper in to room placement.

We’re now getting in to Pattern Languages, Form Languages and Simplicity. I’m behind on the reading, but the book is certainly getting really interesting at this stage. Sequences, and indeed the correct sequencing of work, are fundamentally important to creating living structure.

We had another great chat about sequences in software, and particularly around starting points. Initially we’d jumped from some really rough ideas hacked together in a presentation, to some quite detailed specifics about some of the technical backend.

We noted that we’ve missed a few steps here in terms of setting the goal and context in a way that could be understood by people not involved in the earlier discussions.

Being able to clearly articulate these two things helped us then shape some language around some concepts that we’ll use. This felt similar to defining Jewels in the studio project. Not quite a Pattern Language, but enough to give you a visual feel for some of the things that will get built.