This week was the last week of working at 1:200 before we zoom in to 1:50 and work on the internals of the house.

I’d resolved the main volume of the house and the immediate garden areas, but something about the entrance transition wasn’t feeling quite right. I’d explored two options – the original idea of coming straight off the path from the tree tunnel, and a later idea of a path directly towards the house through two trees.

We reviewed these two options in class and noted how each had a very different feeling. We joked that the entrance through the trees felt like a grand Italian villa, so I coined this “The Grand Entrance”. I didn’t come up with a good name for the original idea, so I just called it “The Side Path”. This was the more natural route to take, and has a really interesting effect in that your experience of the house changes as you get closer, since you’re always changing angle as you walk the meandering path. While there’s a change in scale as you walk up the Grand Entrance, there’s not much of a change in shape.

Initially I couldn’t decide between the two, so I did some analysis of the centres created. The Side Path felt nice in that there was lots of interlock from the centres “spooning” each other, but The Grand Entrance did feel more balanced overall. I wasn’t keen on how each centre of the Side Path narrowed to a tiny point.

After some reflection, I decided I did prefer the feeling of the Side Path overall. It was the natural approach path and helped continue the really good feeling given by the Tree Tunnel. I figured I wanted this approach to the house, but needed to find a better overall balance. To do this I added some smaller trees – around shoulder height – in two areas.

Firstly, I added just three small trees (black pins) to the right of where the Grand Entrance would have been. This had the effect of almost closing off the big open lawn between these trees and the orchard to the rear of the house. I also added extra trees to the orchard to strengthen it as a centre.

After this, I added some more smaller trees to give better shape to the area around the Side Path itself. 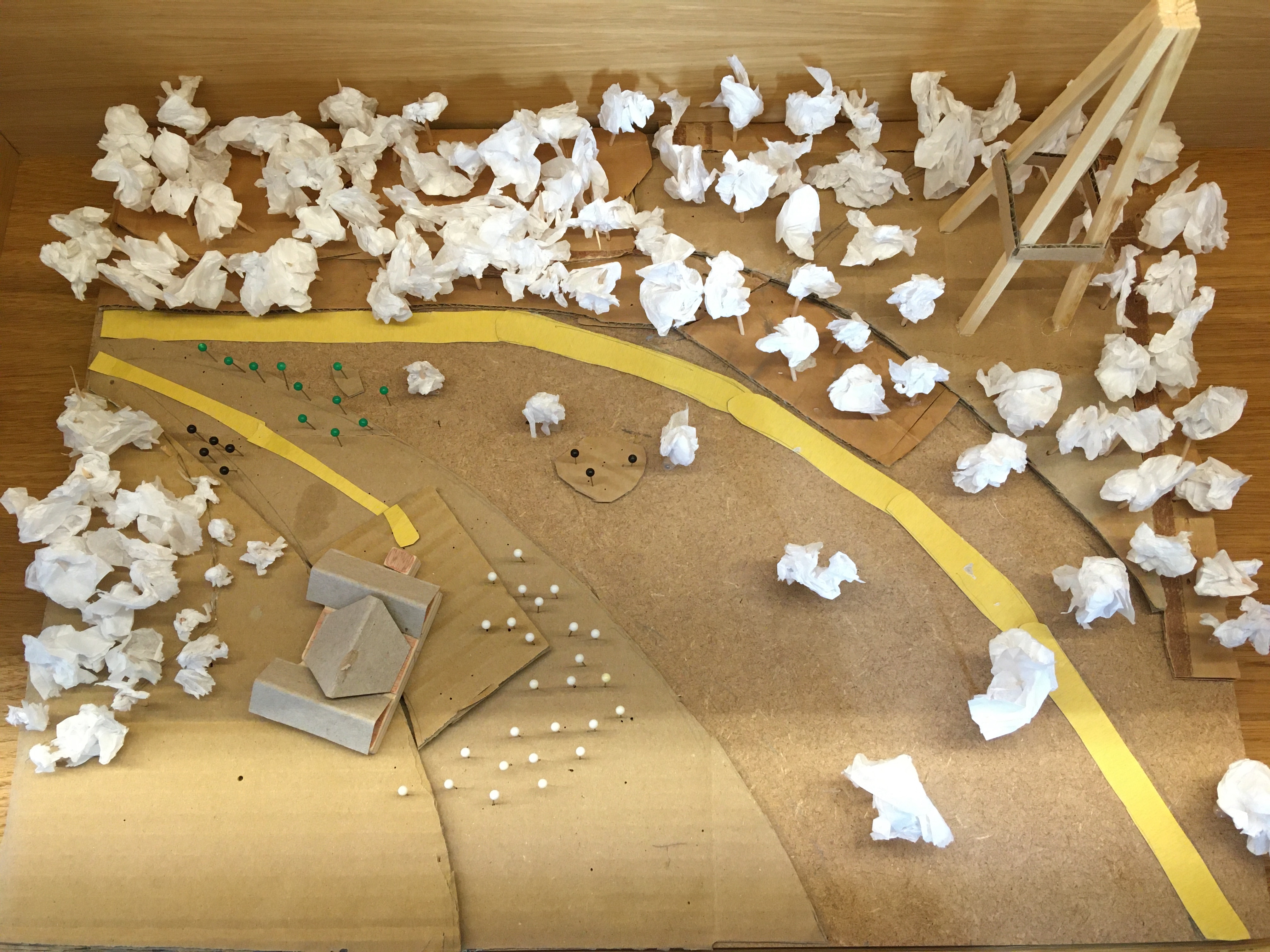 While it felt like the path was still a little direct, another analysis seemed to suggest I was going in the right direction. 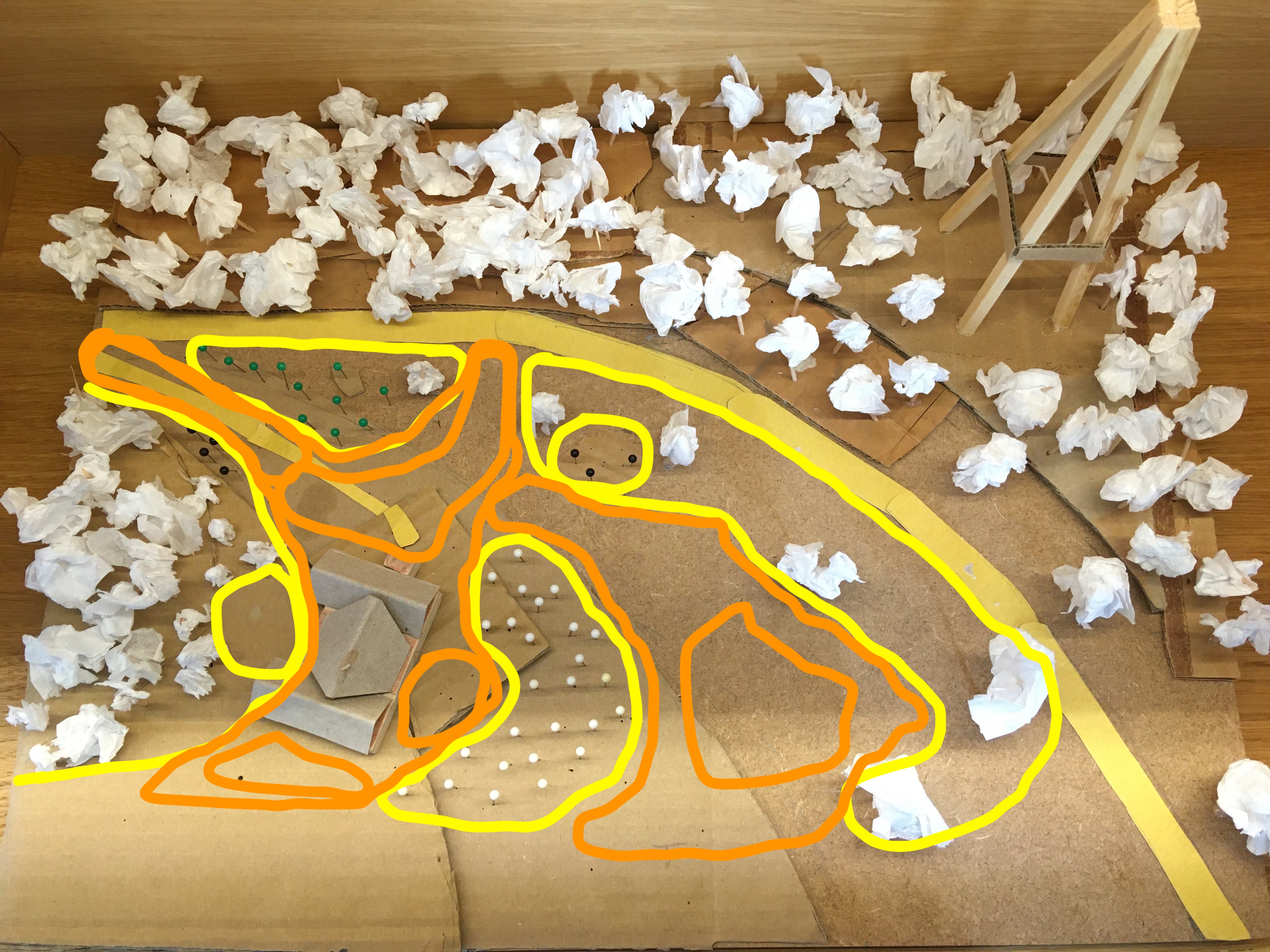 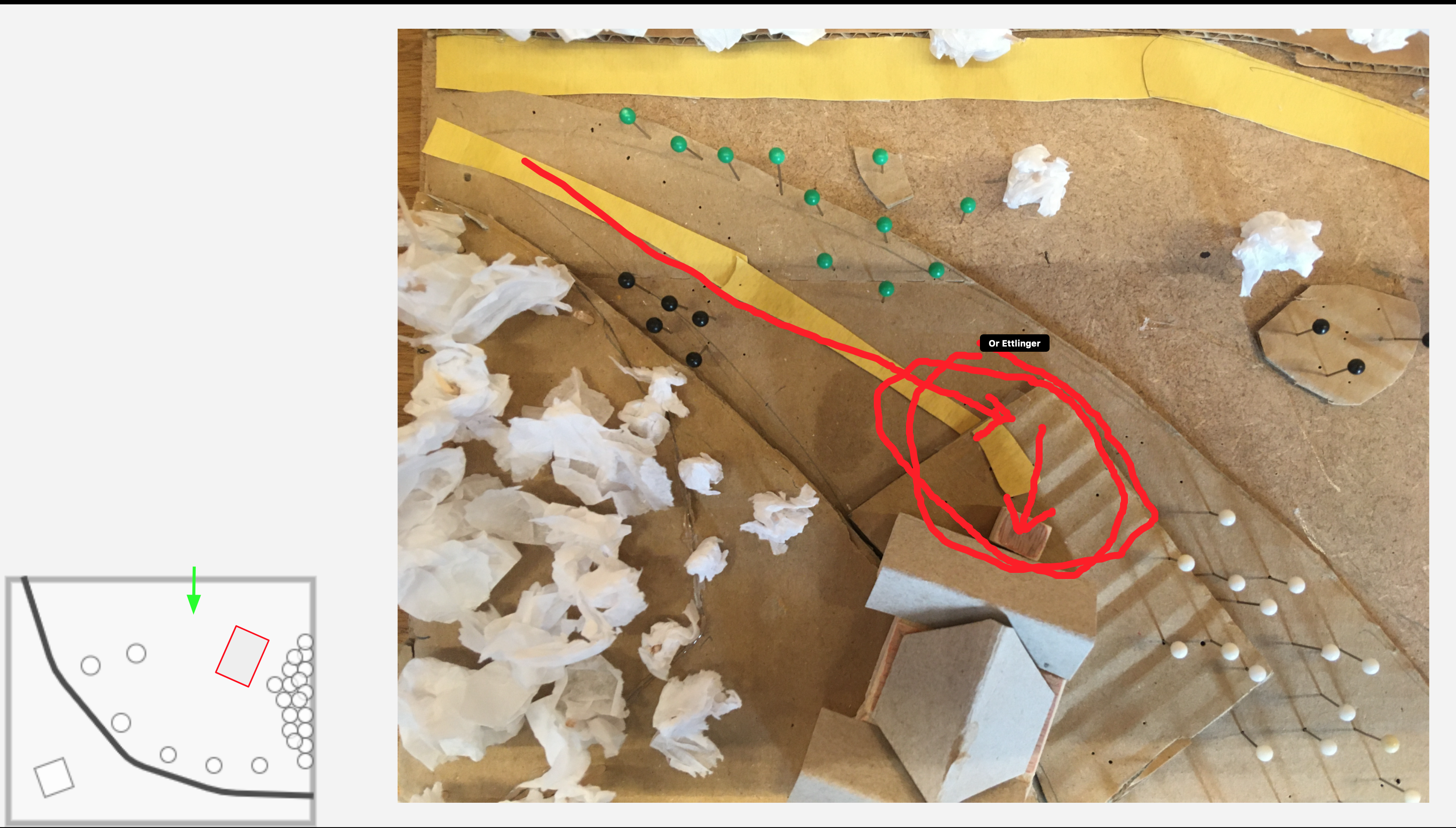 Inspired by some other students’ models, I emphasised the more open centres using green card. I then added a further cluster of trees to the south of the house to make the Side Path bend onto the main entrance clearing. This finally felt like the “humble retreat in the trees” jewel. 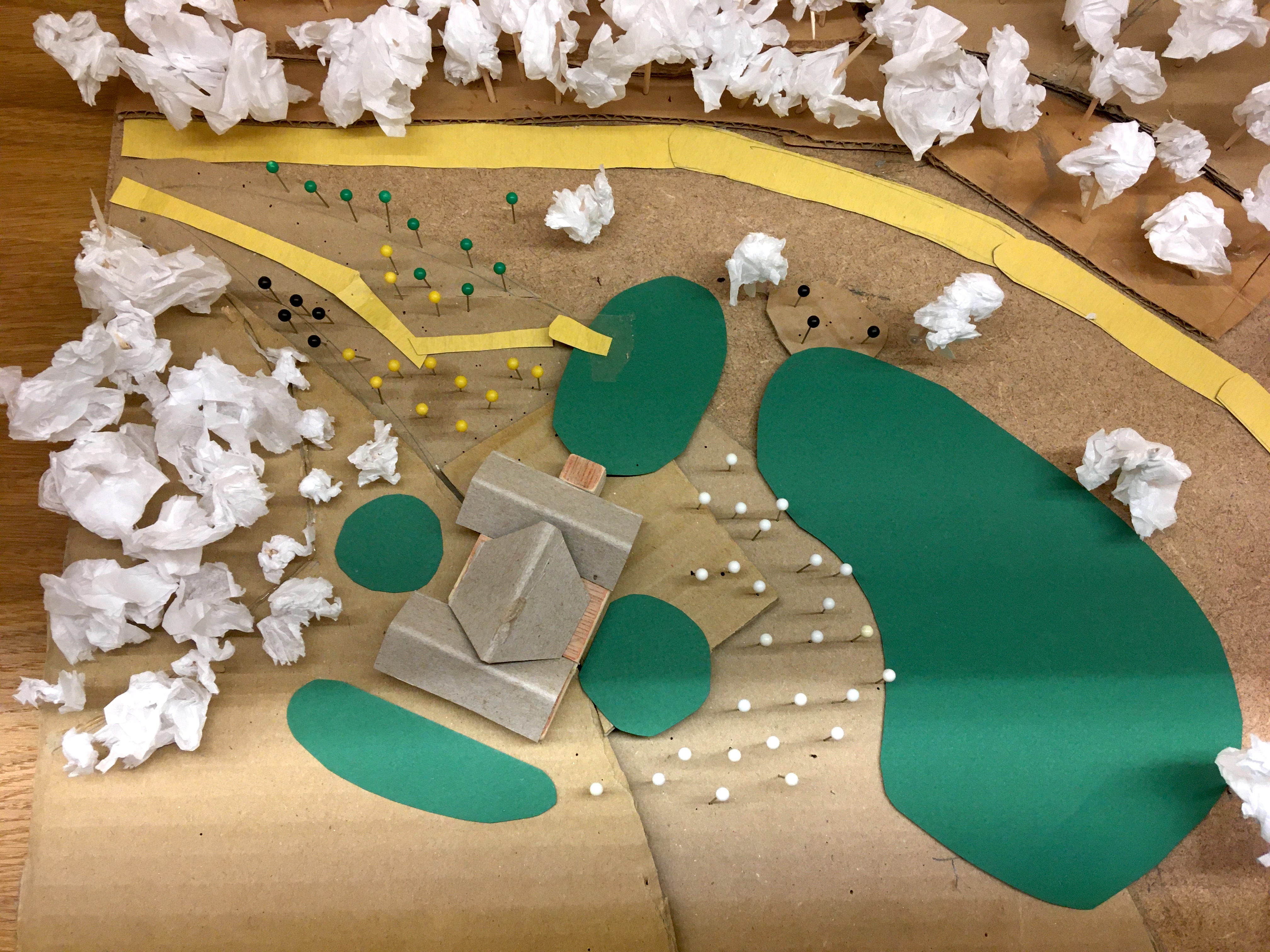 We also had a great talk by Duo Dickinson about how he uses models. There were so many great examples – plenty of them featuring on his website, so here’s a quick snapshot.

A thought I had while seeing all these models was that scale models keep getting better with each iteration as the project gets closer to reality. 3D rendering gets worse. The render is almost always flashy and beautiful. As budgets get squeezed, shortcuts are made, cheaper materials are substituted, the end result is never as nice as the drawing. 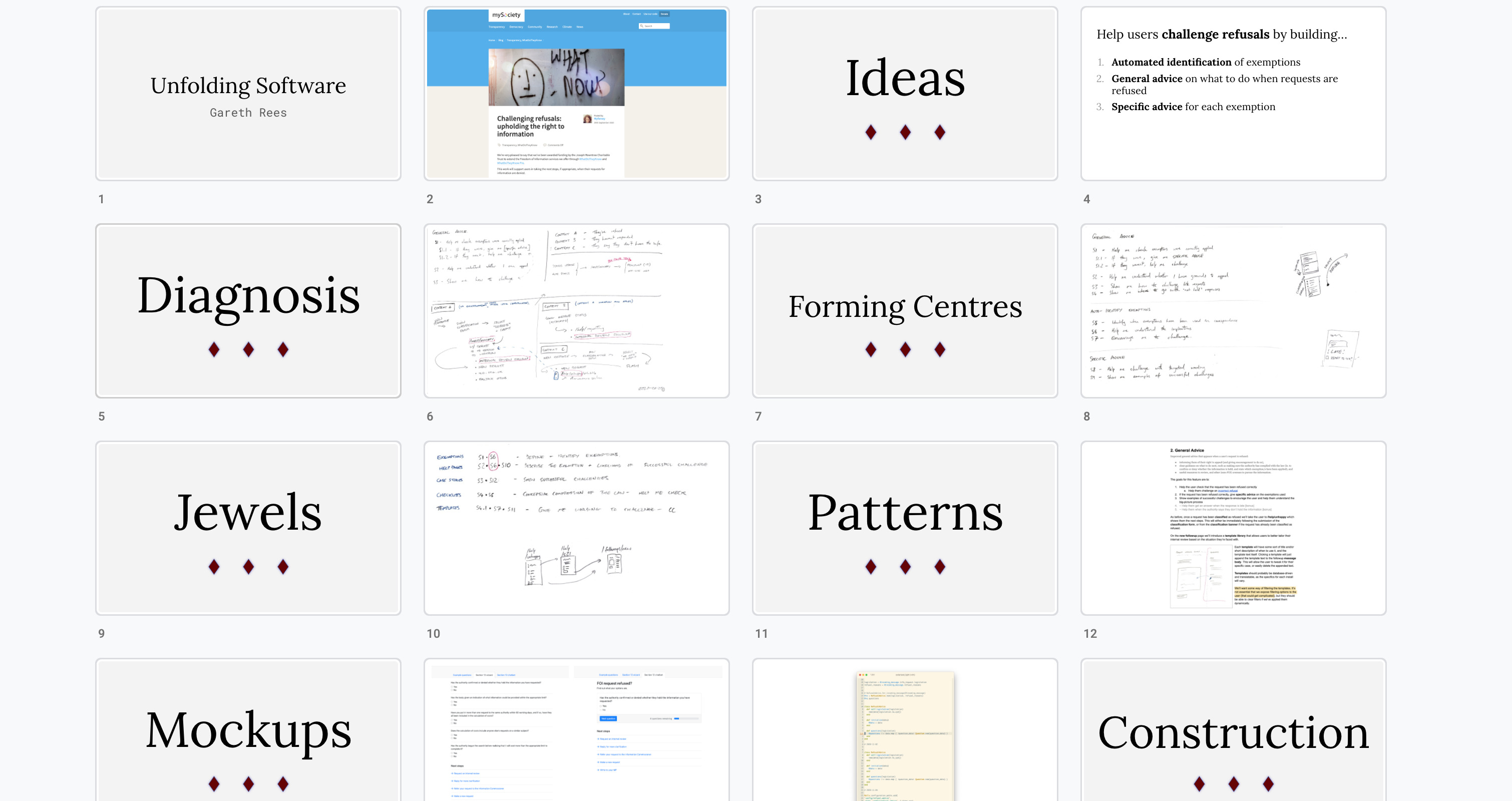 At the end of the week’s webinar, there was a discussion about how to spread the ideas of Building Beauty.

The “Social Network” of BB is important. We discussed this a little in the Software seminar. Here’s an extract that I wrote up around why Building Beauty has been such a great learning experience.

This Building Beauty course (and the use of this Basecamp) is an interesting form of non-general-purpose social network. I’ve been thinking about this in relation to some other purpose-specific networks and why I haven’t really got engaged with them, and why BB is working so much better.

It’s a small group, which means everyone contributes to a similar degree. In other groups some people have so much more time to contribute that they say all there is to be said.

We’re all at roughly the same learning level, with some super-experts. This means that everyone feels comfortable in contributing, knowing that we’re all helping each other learn, but under the watchful eyes of a few people who are much further ahead so can course-correct any major issues in thinking.

We’re a closed group, which means that we don’t have to contend with constant drive-by comments or so many points of view that we go on tangents.

It’s time limited. This is both an incentive to contribute as much as possible within the timeframe – it’s easy to put off contributing to open groups until tomorrow – and also a relief in that you know you’ll get chance to relax and recuperate after a few months of high-intensity contribution.

There’s a clear purpose, in that it’s not just a place for a chat. We’re actually working towards a goal. That’s not right in all situations, but it does help maintain focus us on creation instead of consumption. We’re actually trying to make something.

If this is a good model, there are some questions worth trying to figure out.

How do we stay connected afterwards? I think this is where the general purpose networks come into play. We’ve all built up real-life connections so I think we’d all agree we’d all be happy to receive a follow or email or DM from anyone here.

How does the work get preserved? Maybe the last few weeks of the time period should be dedicated to collaboratively writing a summary of the experience. Or, maybe it shouldn’t? Maybe it should just be ephemera; not everything is worth saving.

How do we then connect to the wider community? This is still a little bit of an unresolved question. Sure, we now have more personal connections within the community, so by proxy we’ll become aware of some of the work each other are doing. Perhaps there’s some equivalent of a contributors list that signposts us around.

How do we advance after the time-limited period? Perhaps there’s some sort of way of match-making for a new cohort of small teams to form, where you get placed with increasingly “knowledgable” members. Though, must not become a cult!

We also spoke about startups and disruption. It’s important not to confuse the two. I agreed with James that “VC startup culture” is not the model to follow. Disruption is about creating new markets by providing a different set of values (rather than iterating or expanding an existing market). This feels like looking for latent centres. Building Beauty certainly has different, better values. The best books I’ve read on this are Competing Against Luck and Blue Ocean Strategy.

I think something Building Beauty could do, and encourage others to do, is to lead the way in showing what good looks like. In the traditionalist architecture world there’s @wrathofgnon, but I think that’s inspired a pattern of doing this on a local level.

Here’s an example of one such account in Cardiff, doing diagnosis of building height. Building Beauty can give “normal people” the tools to do this, and the more people that do it the more pressure gets put on local decision makers. 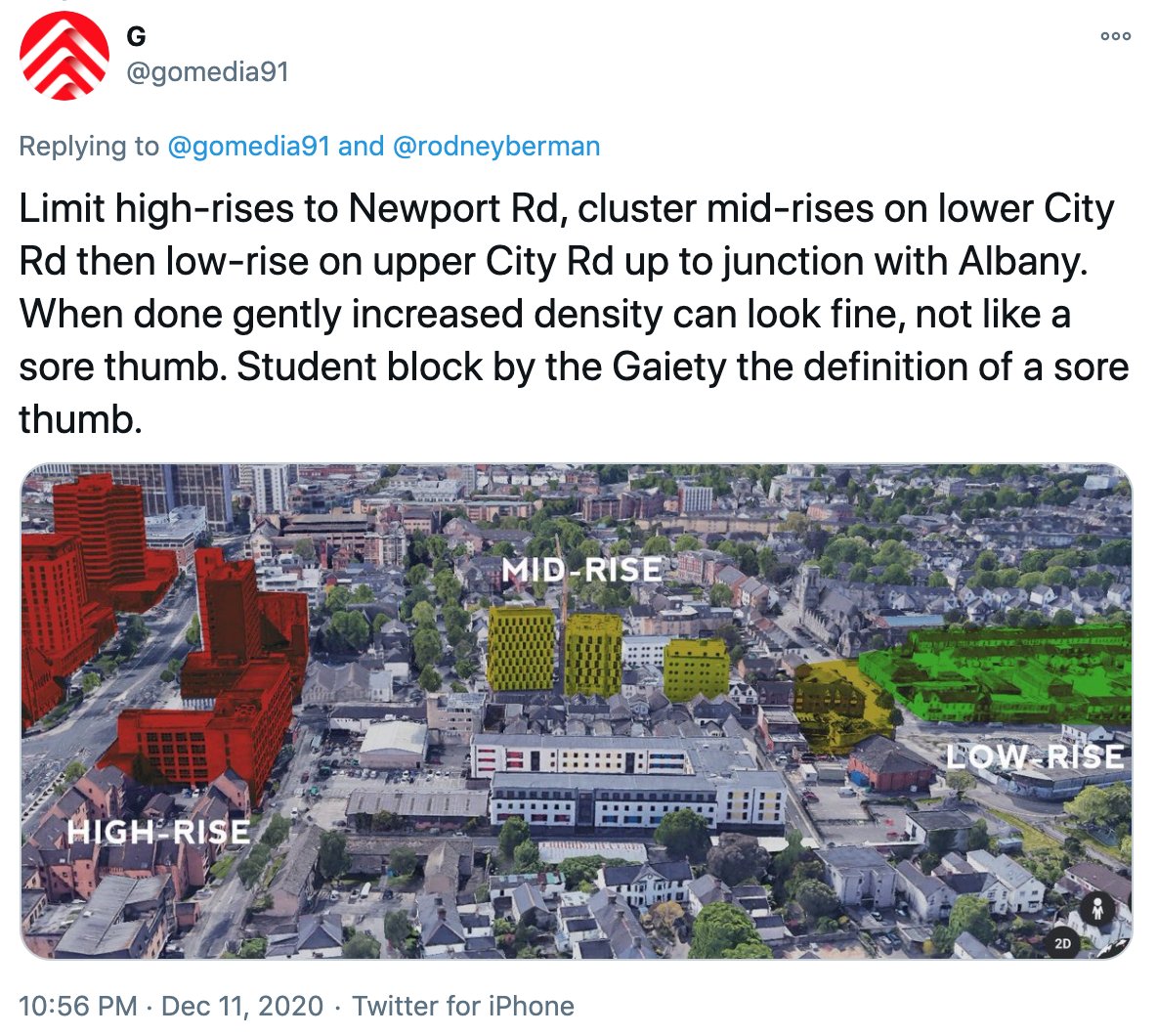 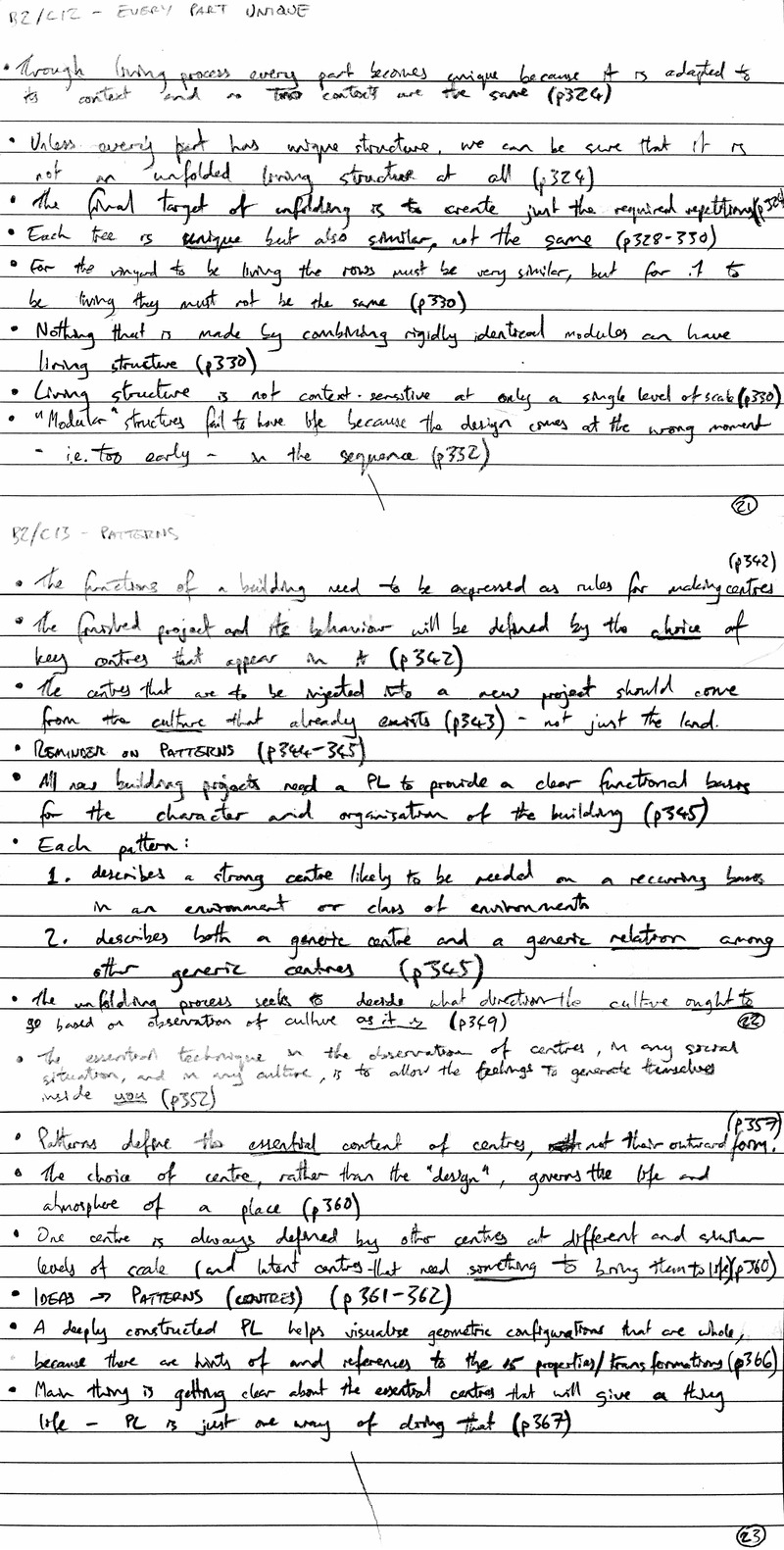 This week was James Maguire. James was a long time collaborator with Alexander and CES. He later moved on to become Campus Architect at Boise State University in Idaho, and at the University of North Texas System.

The talk was really interesting as James worked mostly with large-scale projects, and all the baggage that comes along with that. I asked a couple of questions, mainly around some of the themes in The Oregon Experiment.

To paraphrase, someone asked “Why don’t people care about their environment?”. My take on this is that projects are just way too big for individuals to comprehend. This especially affects people outside the project, that are impacted but not directly involved. The way to tackle this is piecemeal growth – weighting budgets in favour of small projects – but almost no one wants to do that.

Budgeting maintenance is a common problem faced by software teams and people who look after buildings. James often reduced the size of the building so that they could develop the surrounding. They used the budget as a fundamental aspect of the building process, not something that was done at the end to figure out how much all the design work will cost.

CES evaluated budgets in light of what will be most whole – what will make the most impact and make adjustments elsewhere. “We can use cheap plywood here and that will allow us to do a nicer window over there.” Some things are less variable (e.g. wiring), some things are more variable (e.g. fixtures). The important thing was where the lights were going to be, not what the fixtures are.

Learn how a budget impacts what actually gets built.

On participation, to help prevent folly projects by donors and retiring executives, James tried to put together some design standards to inform what type of projects that would get funded. They also included a design review panel to include more people with a broader outlook.

Given public universities are often subject to budget fluctuations, they would develop example projects for a normal budget, and then also something with a more stringent budget for harder times. This helped the group make better decisions depending on the budgets they were faced with.

I’m beginning to find some of the overlaps between Nature of Order as it applies to architecture and software. Here’s my interpretation of the first few steps that matter: